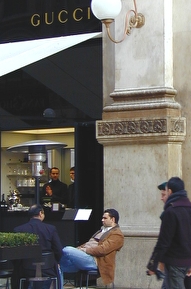 More pragmatic than part of a business strategy, Gucci decided to enter the realm of java after city officials agreed to allow them three display windows onto the galleria only if they added a café.

The proviso was a nod to neighboring café Il Salotto and an attempt to keep some of the galleria’s character as the center of Milan’s coffee culture despite its recent appeal for designer shops.

Gucci Cafe is a tiny alcove tucked into the front of the accessories shop where the coffee is served with a cube of dark chocolate and tiny arrow-like spoons. Gucci’s espresso-ing of itself is, all things considered, slightly chilly.
A spare design mitigated by one metal trough with tiny shrubs and only outdoor seating with mushroom heaters made for some blue-fingered fashionistas in its winter debut. Gucci joe may also be memorable for a jolt not related to caffeine: priced at €3.50 ($4.50) a cup, it’s 20% more than mosaic-adorned and well-heated Caffé Zucca just across the way.
Can Prada be far behind? text + photo 1999-2007 zoomata.com
Play nice. Please use contact form for reprint/reuse info.