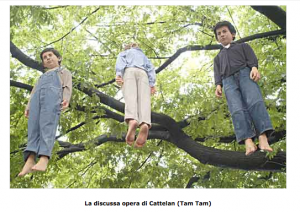 Franco De Benedetto, a Milan construction worker who climbed a tree to “liberate” artist Maurizio Cattelan’s hanging dummy children, was sentenced to two months in prison for his crime against art.

On May 5 2004, three realistic-looking boy mannequins were strung up on an oak with nooses for Cattelan’s unnamed installation in Piazza XXIV Maggio. The evening after installation launched, where it was intended to stay for a month, De Benedetto brought a ladder and an Exacto knife to the square in the Navigli area. He pushed past the security guard, shimmied up the trunk and cut two of the “children” free before falling five meters to the pavement. He was hospitalized but not seriously injured from the tumble.

Cattelan and the Fondazione Nicola Trussardi, sponsor of the installation, decided not to prosecute for estimated damages of €64,700 ($79,000). The prosecution and the defense settled on a fine of €800 ($977) but judge Michele Montingelli deemed the punishment “incongruous” with the crime and ordered jail time. The remaining dummy went on to cause a similar furor at Seville’s Contemporary Art Biennial in fall 2004.