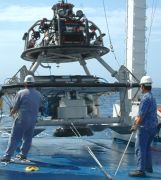 Ocean bottom seismometers and pressure sensors in the station detect both quakes and changes in the height of the water column, this one-two approach may help better determine which quakes result in killer waves.

Quakes at sea, even those of significant magnitude, may or may not create a tsunami. Recent false alarms following the Indonesia quake are an example of how difficult predictions can be, according to Dr. Laura Beranzoli, of Italy’s National Institute of Geophysics and Volcanology.

“One of the challenges for researchers in this field is to devise a monitoring system that can more precisely predict tsunami triggers,” said Beranzoli, who has served as technology director on Geostar prototypes since 1995.

This deep-sea station is acoustically connected to a buoy equipped with a weather station, an acoustic modem and GPS. If a temblor at sea measures more than 6.5 on the Richter scale and water column height rises more than three centimeters, the station sends data to land. Devised by an 11-nation team — including ocean experts from Germany, France and Morocco – the kit is powered by solar panels.

Not only does Geostar have to be accurate, it also must be fast.

The Atlantic Ocean, including the Mediterranean, is the second largest source of tsunamis, but early warning systems, such as DART used the Pacific, are less effective in this region because risk zones are closer to the coast.

“We don’t have the luxury of waiting half an hour to see if the tsunami has been generated,” said Nevio Zitellini director of Italy’s National Science Council (CNR) Institute for Marine Sciences and Geostar project coordinator. “The prototype sensors are on the tectonic source, so if something happens we know immediately.”

Zitellini says the monitoring system would be able to emit a warning signal to coastal authorities in just five minutes, an ambitious but necessary time frame since tsunami waves would slam into tourist region Algarve in 15 minutes.

A UNESCO commission in 2005 said an early warning system was “urgently needed” for the Atlantic and planned to have one in place by 2007. Work so far has concentrated on tide gauges and a creating network of observatories.

For sure, cost is a factor. The EU-funded Geostar, designed in collaboration with IRA-INAF as part of the ” nearest” (near shore sources of tsunamis) project, comes with a four million euros ($5.5 million) price tag, not including staff and maintenance. The unreliability of current warning systems may make Geostar an option.

“Up to now, tsunami warnings have been based on the earthquake magnitudes leading to a lot of false alarms,” Zitellini said. “After a while people don’t believe them any more and underestimate the real danger.”
Image courtesy CNR.