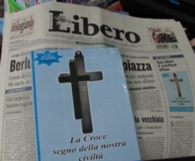 For an extra 1.50 euro, Italians can pick up the symbol of the Catholic Church with their daily news.

This is the latest installment in the national ‘crucifix soap opera,’which has been dominating media attention since late October after a Muslim in a small town won a court order to have the cross taken down in the elementary school attended by his two children. The resulting political and religious uproar had the school in Ofena (Abruzzo) shut down and then reopened, with the cross still hanging in the classroom.

“Yes, we’re selling the cross with the newspaper,” said chief editor of right-wing paper Libero, Vittorio Feltri, in an editorial today. “We’re not giving it away out of the fear that someone, not interested in the symbol of Christianity, might throw it away. It’s not nice to throw away the cross.” Profits made from sales will go to charity.

Feltri’s remarks came after a series of investigative reports showed that Italians aren’t always so touchy about the representation of the national religion – one large bronze crucifix, created for 2000 Jubilee celebrations, was discovered abandoned in a warehouse looking very much like an unwanted cadaver.

Religious publications in Italy often sell Catholic-inspired extras — from a comic book on the life of Pope John Paul II to the Bible in installments — but they rarely make it into the mainstream press. An unscientific poll of newsstands in central Milan would appear to show that the initiative is just another attention-getting antic — in two news outlets only one of the slim metal crosses had been sold so far.

“It’s just a way of dragging out the controversy,” newsstand owner Vincenzo told zoomata. “Most people are Catholics, but they aren’t practicing Catholics. I don’t see crosses flying out of here.” His most recent best-selling gadget, back ordered five times, was an EU-mandatory safety vest that cost an extra six euro.

Interested or not, it would appear that politicians throughout the country are jumping on the cross bandwagon. Between law proposals to make hanging the cross obligatory to regions purchasing truckloads to hang in schools and offices, this is one debate unlikely to end soon.
Adel Smith, who started the crusade to remove the crucifix, told Italian news agency ANSA that he plans to ask to remove the cross from the court hearing the case.”I don’t think I would feel sure of getting a fair hearing, with that hanging over the judges’ head,” he commented.@1999-2009 zoomata.com