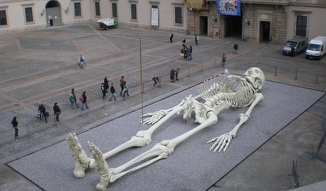 A skeleton nearly 80 feet long reminds tourists and passersby of their mortality as they snap pictures of the Duomo or eat gelato.

The installation is part of the city’s art fair, MiArt; the leg bone is connected to the hip bone in the courtyard of Palazzo Reale. 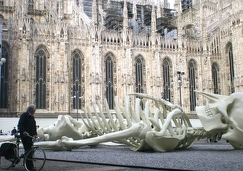 The skeleton has what looks like a giant knitting needle piercing the right hand, meant to represent meetng point of cosmic energy and the human element. 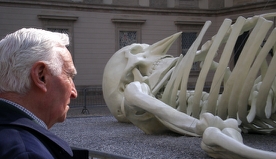 Made out of polystyrene, them bones weigh in at eight tons.

After it is dismembered in Milan May 1, the macabre reminder will be haunting cities around Europe including Hamburg, Brussels and Paris.