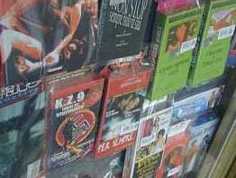 Among the usual videocassettes of dubious taste vying for attention in Italian kiosks are a series of vintage “Nazi-porn” flicks.
The Sex and Violence collection, released as a supplement to cult-movie magazine Nocturno, has sparked debate on a little-known chapter in Italian movie making.

“Night Porter” by Liliana Cavani and “SalÃ²” by Pier Paolo Pasolini, which explored the tenebrous confines of sex and power in W.W.II, both met with savage criticism and censorship at the time of release. B-grade horror movie directors like Bruno Mattei and Sergio Garrone banked on the publicity of the avant-garde films, but carefully made a hot topic squeak by censors — hard-core scenes were often shot separately and inserted afterwards for foreign distribution.

In a quarter of a century, public opinion about the films has reversed. “Night Porter” and “SalÃ²” (in which some censored scenes were “reinstated”) were sold recently as supplements to mainstream publications at newsstands. This time around they were hailed as cinema classics by news weekly L’Espresso and daily L’UnitÃ , while the re-release of the sub-genre from an amateurish fanzine seems destined to make brouhaha.

“Finally on video, the most crude and violent Nazi movie ever made…Painstakingly restored from the only existing print at the Center for Experimental Cinema…a must-see of the Eros-swastika genre,” hawks the cover of “KZ-9 Lager di Sterminio” (“Women’s Camp 119).” For our review of the film, see the editor’s notebook.

The publicity ploy seems to have worked — four neighborhood newsstands ran out mid-month of the March issue of Nocturno with videocassette, which retails for about $10 USD.

“We’re currently evaluating whether there are grounds for legal action,” said Emanuele Fiano, former president of Milan’s Jewish community in a phone interview with zoomata. “It’s the coupling of sex and violence with such an important history that disturbs me,” he said. “Young people may find it appealing and it only perpetuates the Nazi myth.”

Fiano admits, though, the matter could well become a legal quagmire — courts are unlikely to block films, now considered offensive, that were originally given the green light for viewers over age 18 a generation ago.

“The (Nazi movies) passed perhaps because they weren’t noteworthy,” commented Alessandro Loppi, cinema critic for Jewish community portal MorashÃ  who is currently working on an encyclopedia of Italian cinema for publisher Treccani. “Or worse yet, to be malicious about it, you could say they weren’t boycotted (at the time of release) because they didn’t offend most people.”

Nocturno editor Manilo Gomarasca, who declined to be interviewed for this article, was quoted in Italian daily il Giorno as saying, “These aren’t films worth giving more importance than they deserve. They’re naive films by today’s standards and they had no political intent nor were they meant to be offensive. “

Perhaps a sort of cinematic Darwinism would seem appropriate for these forgettable films, but a search revealed most are readily available outside Italy, on the Internet.

In the March editorial, Gomarasca, after apologizing for Nocturno’s erratic publishing schedule says the magazine distributes these films with the intent of giving cult-film fans the occasion to see rare movies and judge for themselves.

“Personally, I don’t see anything scandalous in the re-release (of the Nazi movies),” said Loppi. “If anything it confirms the way things are in Italy. In a country where people are adequately sensitive, no one would dream of buying certain films, let alone distribute them, shoot them, write them or finance them.”