Most people wouldn’t pick Milan as a tourist destination, but should you attempt it, aim for Design Week.
This is a working city, best when humming with some sort of event. And while the Fashion Weeks seem like they’d be a good choice but unless you’re Suzy Menkes or a 20-pound Ukrainian model, trust me, you won’t have any fun.
Design Week, usually held the first week in April, is more democratic.
Even if you don’t go to the fair (officially called Salone Internazionale del Mobile ) or snag any cocktail invites, there are a ton of events — 350 this year– outside the fair (fuori salone) that anyone can visit, often getting free drinks and food in the process. 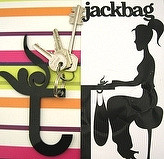 It’s also democratic because even regular joes can have an opinion. Most times you can touch, try out, sit down. Hmmm. This chair is uncomfortable. Wouldn’t this look great in my kitchen? Pretty, but you could never read by that lamp.
And, if you have the good sense to be single or at least unaccompanied (somehow this always eludes me), it’s also a great way to meet talented young things. (The Belgian/Dutch showcase always seems to have the most talent, in both senses of the word).

This was my first year doing just the fuori salone, even a neighborhood reccy was well worth it.
Diana Eugeni, an architect friend of mine, launched a gizmo called “Jack Bag” to keep your Gucci from touching the ground. A curvy key chain made of plexiglas, it latches on to the table and provides a hook for your handbag, ever more important now that restaurants seem to have all decided that normal square chairs are hopelessly démodé. It’s part of a project called cutnpaste where designers sell their stuff directly to consumers.
At the Dutch/Belgian fuori salone, there were fuzzy weeble-wobble stools, a goth lamp with a stuffed mouse in the base, a bracelet with a razor blade (“kill yourself whenever you want,” the tagline says) and some fabulous ceramic vases with a tulip print.

The Established & Sons installation in an ex-pelota court was the place to be: A-list British designers (Zaha Hadid, Jasper Morrison, Sebastian Wrong) plus free beer.
While the Miele kitchen store plied guests with free crepes, the most creative use of food in a furniture fair goes to BMW, sponsors of a molecular cooking extravaganza/DJ set with chef Carlo Cracco whipping up dishes made with liquid nitrogen. (I organized a segment for Discovery Channel once on molecular cookery. It looks neat, but the only thing that really tastes better made with liquid nitrogen is ice cream. The super-quick freeze locks in the flavor and it doesn’t melt quickly or give you ice-cream burn).

Bigger is better seemed to be an ongoing theme. Of the outsize installations, Jacopo Foggini’s enormous chandelier (the same one lording over Luciano Pavarotti during the Turin Olympic opening ceremony) was probably my favorite.
The giant Ikea furniture — a couch, a sofa, a bookcase — placed around town seemed slightly ominous rather than playful. A reminder of how many of these bright-eyed, creative nordic types may end up with careers in indentured designer-dom.