The name, Fattoria di Al Cappone, is a play on words from the Italian “capone” or capon, though the 15-or so men who work here raise quail and a few crops. 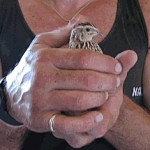 In 300 square meters on prison grounds (about 3,200 square feet), they raise the birds whose eggs are sold at a nearby Coop supermarket and a farmer’s coop, Consorzio Cascina Nibai, in the outskirts of Milan.

Launched a few months ago, the farm is the brainchild of journalist Emilia Patruno, a long-time prison volunteer whose association il due also developed the “stolen kisses” chocolates project.

Funded by a bank, before hitting the hoes inmates followed training courses given by the farmer’s coop. The group is working on a new potato, a purple Andean variety, that it hopes to patent for when the Expo comes to Milan in 2015.