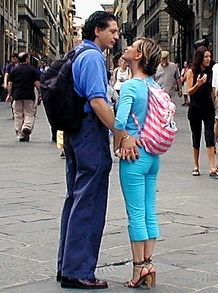 If Italians are trying hard to get what they need, economy-wise, at least they’re having good sex.

Italians are among the top orgasmers worldwide, tied for first place with Spain and Mexico, enjoying the big wow 66 percent of the time they have sex, according to the Durex Sexual Wellbeing survey. The global average? A measly 48%.

It may be a question of slow sex — a little like the slow food concept — that
helps Italians do it better.

Italians who declare themselves fully satisfied with the intensity of their orgasms spend nearly twice as much (an average of seven minutes) on foreplay compared to under 4 minutes, globally.

Some 44% of Italians who reach orgasm regularly said they’d like to spend more quality time with partners, as opposed to a 38% global average.

The condom company’s yearly poll, which asks 26,000 people in 26 countries about life between the sheets, also found, however that Italy’s Casanovas are still not quite satisfied, with only 64% stating they’re fulfilled by their sex lives.

The survey also confirmed that home-bound Italian mamma’s boys and girls still favor Fiat sex (not surprising if you have followed the “Love Park” saga), 82% have had sex in the car.

6 thoughts on “Italians Get Some Satisfaction”