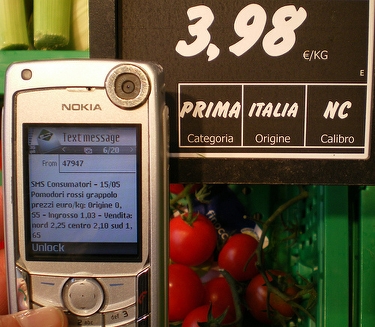 Cash-strapped Italian consumers can now use text messages to tell them if the price is right.

Euro-pinching shoppers thumb in product names — from pasta to produce and parmesan cheese — and a text message speeds back with the average retail price for North, Central and Southern Italy.

SMS Consumers started two years ago with a three-month test run, offering info on a limited number of fresh produce; it’s back bigger, sleeker and with more bells and whistles, sort of the Ferrari of text message price watches.

In the Philippines, where citizens interact with 50 government agencies via text messages, the Department of Trade and Industry (DTI)has also offered a weekly SMS price watch (.doc) for basic necessities since 2006. Consumers pay about $.05 per message (2.50 Philippine pesos), for average regional prices on 13 categories of consumer goods, ranging from canned sardines to soap.

The Italian service tracks 80 types of products using data from 2,200 vendors of different kinds (supermarkets, hypermarts, outdoor markets) around the country, updated five days a week. Every man, woman and bambino can text the service at no cost five times a day and 30 times a month.

Prices are updated every weekday on the website, where skint shoppers can play with a shopping simulator or check out a price index which shows whether the market for prosciutto is more bull than bear from previous weeks. Since the April launch, over 240,000 shoppers have thumbed into the service to avoid getting gouged at the checkout.

Italians, like Americans, have been feeling the pinch of rising food costs. Inflation in the Bel Paese is at an 11-year high; a recent pasta strike is just one sign of the discontent.

By texting the word “tomato” (pomodoro) to number 47947 from any cell phone carrier, three messages come back in quick succession detailing average prices for different kinds of tomatoes (cherry, salad and vine) from around the country.

According to the text message, red vine tomatoes cost on average €2.25 a kilo (about $3.50) in Northern Italy, instead the lowest price at a supermarket was about €0.15 cents higher, and this cornerstone of Italian cooking be easily found selling for 75 percent over that average, ringing up at €3.98 per kilo.

It’s the same for skim milk, listed at a single national price of €1.40 a liter, instead found at €0.15 cents higher or Parmigiano-Reggiano cheese which turned up at €0.45 cents higher per kilo than the text price.

Preoccupied punters could easily consume a lot of shoe leather trying to find prices in line with the text service.

“There is no such thing as a ‘right’ price,” said Gavino Sanna president of consumer group Associazione Consumatori Italia. “The service is very well executed, but the problem is without brand names and store names, it’s impossible to know where to find these so-called average prices.”

Rosario Trefiletti, president of Federconsumi, one of the eight consumer groups backing the initiative, said critics are missing the point.

“If you know that zucchini go for a few euros per kilo and you find a store charging twice that, you can decide whether to shop there or not,” Trefiletti said. “With this kind of detailed information over a long range of time, consumers can make smart choices and spend less.”

That left one more place to test the price watch. As every savvy signora knows, outdoor markets are generally cheaper than grocery stores for produce, even in Milan.

The going retail price for cherry tomatoes in Northern Italy, according to SMS Consumers, should be €3.30 (about $5) a kilo, but at one busy veg stand some sufficiently ripe ones could be had for as little as €1.

Alas, the fastest way to spend less may still be analog: the stall with the longest line usually offers the cheapest prices.