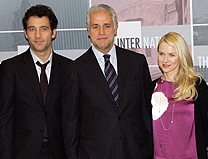 Most Milan residents don’t blink when standing next to a 10-foot, 20-pound model at the supermarket and they’re pretty used to dodging sidewalk photo shoots as if they were trash.

Not a lot of major Hollywood productions choose Milan as a backdrop, though, so the city held a special presser to boast that “The International” directed by Tom Tykwer (“Perfume,” “Lola Runs”) starring Naomi Watts and Clive Owen has come to town. (Watts and Owen snapped here with president of the Lombardy regional government, Roberto Formigoni).

The plot? Owen (an Interpol agent) and Watts (a Manhattan district attorney) are on a whirlwind investigation to uncover a corrupt banking scheme that finances an arms dealing ring, bringing them to Berlin, Istanbul and yes, even Milan. Not overly original (or hugely compelling) but whatever.

For the next 10 days or so, there’s a chance one might see Watts or Owen by hanging out near the train station. The crew will be shooting there as well as at the Victorian Hotel Gallia across from the station or the one real skyscraper — the Pirelli Tower — at the other end of the square. Prepare to gawk.