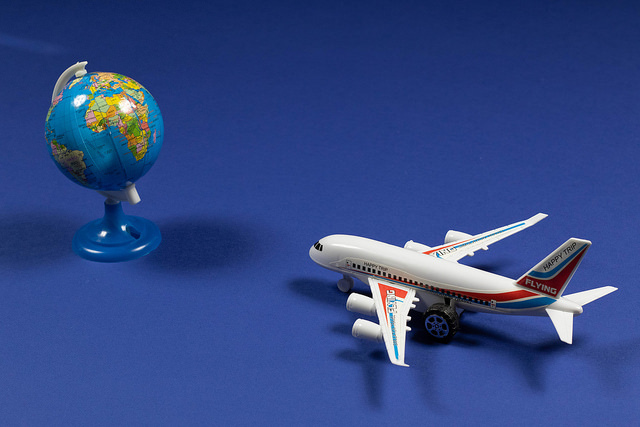 Rampini is something of a professional wanderer. Born in Genoa, Italy he grew up in Brussels. Still in his 20s, a stint at an Italian communist paper and a knack for languages landed him some reporting trips abroad. He’s been on the move ever since. Now a naturalized U.S. citizen based in New York, he returned “home” to San Francisco where he lived in the early aughts to present his latest book.

The red lines that form the book title – which appears, unfortunately, to be available only in Italian — span from the Holy Roman Empire to the tiger economies of South East Asia.

With a professorial stance bolstered by a bristling halo of gray hair, suspenders and red-framed glasses, he led a packed house of the Italian Cultural Institute on a playful tour of these red lines.

“We travel a lot, we travel faster than ever before but do we understand the world while we cross it at great speed?” Rampini asks. “Sometimes we are surprised, overwhelmed…even anguished, frightened.”

Inviting attendees to draw along with him, here’s a sampling from his red lines. 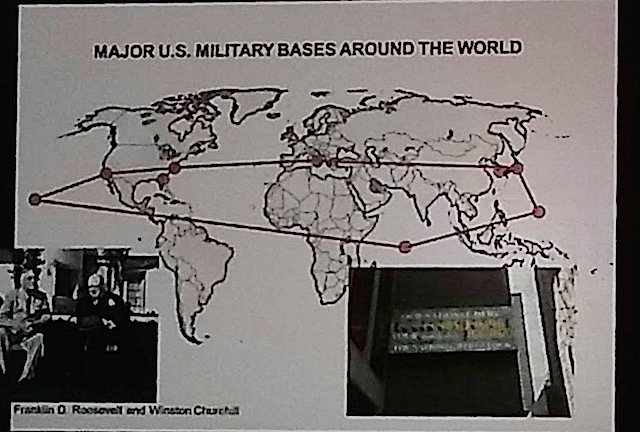 The outline marks major United States military bases; the two images in the corners are Franklin Roosevelt and Winston Churchill (left) and the National Debt Clock in New York on the right. (Apologies for pics from the slides, ugh.)

Rampini notes two important things: the U.S. military bases outline an empire that follow the contours of the British empire. The two world leaders sitting together represent a peaceful transfer of power, the other image underlines his second point: just how expensive it is to keep this global hegemony (military power, but an equally forceful might of soft power, including fashion, tech, entertainment) afloat. The country trying to build the next empire — China, mainly — has some big gaps to fill.

That brings us to the Belt and Road Initiative (BRI) or the Silk Road Economic Belt, a development strategy of the Chinese government with a one trillion dollar price tag.

For Rampini, though, this project also extends into connecting ports — first Athens, Greece, but also an interest in getting a toehold in Trieste and Genoa — into something bigger. Aside from the noted soft power problem, the Strait of Malacca represents another weak link. It’s important for oil reserves but policed by U.S. navy and potentially “could become stranglehold in case of war,” Rampini says.

Dubbing China the landlord of Africa, Rampini adds: “They’re very aggressive in their investments, but it also reveals a vulnerability. They’re not self sufficient in food production; China does not have enough arable land to feed one billion hungry people. So they need to buy Africa because that’s where the land is for them.”

Far from fearing Chinese power, Rampini says “empires in ascent build roads and those in decline build walls,” showing attendees a photo of the San Diego border wall raised during the Clinton administration.

The dawn of the Holy European Union

Brexit approaches. Spain may split apart. EU proponents of liberal democracies could push to give countries like Hungary the boot. Rampini foresees a back-to-the future scenario for the EU getting smaller noting that the European Union as it stands today bears a striking resemblance to the Roman Empire — at the time it collapsed.

But what might it become? He proposes cutting out a map of the Inner Six (the first countries to sign on in 1958) and overlaying it on the Holy Roman Empire at its 962 inception. Ecco fatto: You’ve found a pair of long lost cousins with Germany – the ‘herbivore hegemony’ – at its core.

As for longevity, the Holy Roman Empire kept it together for nine centuries but was never ruled by very strong central capital, today we’d call it today federation. “It was basically kind of a large Germany with satellites.”

One of the chapters from the book that he didn’t get into the hour-plus talk on the 444-page tome recounts the proliferation of Italian Prosecco. Rampini recounts that in his early days in San Francisco, if one wanted to imbibe some pre-dinner bubbly it was champagne or nothing. Just two years later, even in the darkest dives the barkeeps speak of Prosecco di Conegliano and Prosecco di Valdobbiadene as if they were comparing relative the merits of Venice and Florence, he writes.

What happened? This is a happy case of globalization that Rampini tells with a map outlining the top importing countries for Italian wines highlighting the US, Canada, China and, to a lesser extent, the UK.  The outlook is a corker: Prosecco sales are expected to shoot past other types of sparkling wine, increasing by over 36 percent over the next five years from 34.4 million cases (that’s 412.8 million bottles), roughly nine percent of the global sparkling wine market.

This, he contends, is an example of the soft-power spread of the Italian lifestyle – from pre-dinner drinks to post-prandial gelato – creating new connections across the world map. He’s not especially concerned about this new wave of protectionism, either. Rampini recalls the French winemakers of his youth smashing casks of Italian wine in  protest. It’s all a part of the game.

“Why do I play with geography?” Rampini asks. “Because sometimes you have to struggle with geography or be flexible in your relationship with it to really understand.”