The question is: will he ever be popular enough to become an air freshener?

It hit me with startling simplicity while wandering around a cavernous DIY store the other day. I was looking for spray mount. One of the fun things about being an expat is that no matter how long you’ve been somewhere, you can count on remaining blatantly stupid. For instance, what the heck is spray mount called in Italian?

And despite being fluent in the language, I had to say: “You know that stuff with which you do like this…” like a complete moron.

Naturally, the clerk replied, “We don’t have it.”

The store was the size of Milan’s soccer stadium. They had to have it.

So, there I am meandering around three-mile long unmarked aisles, looking for spray mount. And there is a whole wall of air fresheners. There’s all the usual fruit and pine versions, plus Snoopy. 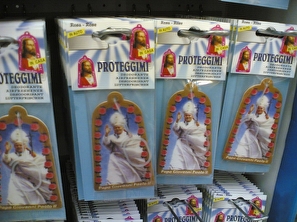 Then there’s Jesus. And three or four different kinds of Pope John Paul models, where the clean smell of sanctity (roses, apparently) will set you back just €1.30 (about $1.60).

There are a few different poses, some more or less formal, but the smile is radiant, open and friendly. Even as a non-car owner, it was easy to see why you might want that face keeping you safe on the road ( “protect me” the package print suggests) as you toodle along the autostrada.

It was equally hard to imagine anyone wanting the face of Pope Benedict XVI swinging from the rear view mirror. A year later, many are still mourning Pope John Paul. He’s on the fast track to sainthood and will likely retain ubiquitous air freshener popularity for a long time to come.

I resumed my quest, grateful that my ignorance had led me on a thought-provoking detour.

By the way, in case you ever need it, Italians usually call spray mount “colla spray. “

1 thought on “The Smell of Sanctity: Pope Air Freshener”