Using an mp3 player that looks a little like the iRosary 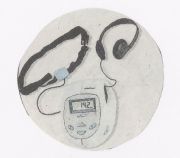 , Gianfranco Parati, head of cardiology at the Italian Auxology Institute, first tested the device on himself and fellow researchers. They tried it while atop Italy’s 4,000-meter high Monte Rosa to see if listening to music that synchronized and then slowed heartbeats would help the heart work more efficiently.

“We started with the idea that slower breathing would have specific physiological effects,” Parati said. Among them, he added, were slower, deeper breathing which uses more of the alveoli, thus improving the quantity of oxygen in the blood.

Then the team conducted a study on 24 patients who had suffered heart attacks. Half of them used the device. In less than three months, the 12 patients who practiced slow breathing (for 15 minutes, twice a day) had a significant improvement in heart pumping capacity, blood oxygen levels and other symptoms when compared to the group receiving traditional therapies. At the end of the study, patients who were “treated” with music were diagnosed with a less severe class of cardiac insufficiency.

The “heart pod” works like this: when the patient breathes, the movement of the chest presses against an elastic band. The computer emits musical tones that mimic spontaneous breathing intervals, 15-18 times per minute. After a few minutes, the music changes causing the patient to slow breathing down to just four or six times a minute.

To see whether music makes tickers reach pianissimo under stress, Parati and his team will try out the device on Mount Everest.