zoomata.com staff Can you say omertà?

German high school students are learning Italian thanks to the son of Sicilian mobster Bernardo Provenzano.

Literature grad Francesco Paolo Provenzano, 24, was chosen from over three hundred candidates to act as ‘cultural ambassador’ in a grant program from the Ministry of Education, according to newspaper reports. These ambassadors, as the ministry calls them, promote Italian culture abroad through teaching the language.

Granted, Italians don’t appear that worried about stereotypes: a series of Renault ads featuring mafiosi have run in the Bel Paese, without protest, for three years. Created by Saatchi & Saatchi in Milan, the “Family” ads were nominated for the international ad Oscars (pdf). 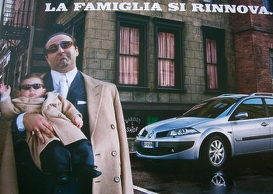 His father, known as the “boss of bosses,” has been on the run from Italian authorities for over 40 years. His story is a case study in omertà, the oath of silence. Provenzano Sr. has been somewhere this whole time, most likely in Italy and Europe, yet no one has seen him, including a priest.

Italian papers say the students have “no idea” who Provenzano is, but say he speaks excellent German. Investigators may find this tidbit of interest, since until 1993 the Provenzano kids and wife were also fugitives, thought to be on the lam between Germany and Sicily.