Making that map shines a spotlight on why organizing data is crucial — and how every organization is a data trove and should be its own best data detective. Plotting visually can inform decision making and highlight patterns – inside trends to be worked into deeper groves or used to recalucate course. The list, according to UNESCO, is “made up of those intangible heritage elements that help demonstrate the diversity of this heritage and raise awareness about its importance.” 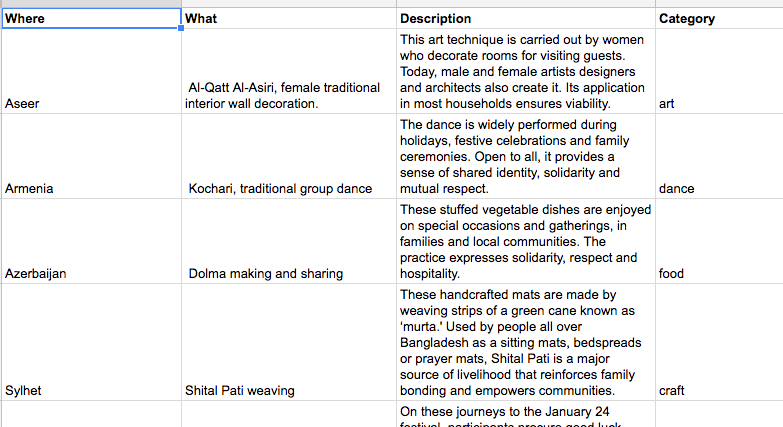 Get them into a spreadsheet (more on this below) and a couple of things jump out. First, most of the 2017 picks reside in Europe/Eurasia with a substantial scattering in Asia but only a handful in Africa and South America combined.

The other is that the bulk of 2017 intangibles are rituals of some kind (15) followed by music (8) crafts (7) then dance, food, games (3 each) art (2) and a justice system.  The total adds up to over 33 because they are practiced in more than one country, another reason it’s interesting to connect the dots on a map.

These classifications are mine and while a handful are arguably more than one category (is the “art of crafting and playing a musical instrument” an art, a craft or music?) the obfuscating language does a disservice to these traditions.

The third, following from the other two points, is that the list is profoundly political.

Take two of the 2017 foods. Well, I’m calling them that: technically, pizza isn’t on the list, it’s the “art of the Neapolitan pizzaiuolo.”  (Nowhere in the official entry is the product of this art mentioned.) According to the New York Times, the pizza makers of Naples owe the honor to Pier Luigi Petrillo, an Italian professor and expert in “lobbying theories and techniques,” who has three winning UNESCO bids under his belt — the Mediterranean diet and Zibibbo wine-making in Sicily.

Similarly, there’s “dolma making and sharing” in Azerbaijan. More so than the pizza — whose most classic version mimics the Italian flag — dolmas are one of those foods associated with entire regions rather than a single country. The Oxford Dictionary, for example, defines dolmas as “popular in the Balkans, the Caucasus, and the eastern Mediterranean.” The Encyclopedia Britannica is more restrictive – limiting it to “Middle Eastern and Greek cuisine” yet Wikipedia defines them broadly as “a family of stuffed vegetable dishes common in the Mediterranean cuisine and surrounding regions including the Balkans, the Caucasus, Russia, Central Asia and Middle East.” All note the term hails from Greek/Turkish origins.

It’s hard to say what the consequences of being awarded intangible treasure status are, but in this case it does seem — like Iran, awarded in this round a game called Chogan that Wikipedia re-directs to polo – that they could be contentious.

For someone with more patience: since 2008 when the quest to list intangibles began, there are 470 elements in 117 countries, it’d be interesting to see a good representation of the geographical distribution to date and see what pops out. This Wikimedia map takes a stab at it, but the color coding is eye-crossing at best. (You’ll also notice that neither the United States nor Canada have any intangibles — although they’re UNESCO members, they didn’t join the nominating countries for this project.)

A few thoughts on the map making

This post was almost titled “when well-meaning people make bad maps.” It was one of those projects that should eat up an hour and then gnaws away at chunks of time over weeks because there’s always a new setback.

And why’s that? Well, because the novice mapmaker ignored all lessons and finger-wagging of instructors. Especially about starting by sketching out the project (What goes on it? Just a point? Or a specific type of icon? Do you need links? Add photos? Videos? And where does this information come from? What does the cleaning of that data involve?) and then choosing the tool.

My first idea was to make a quick and dirty version in Google Maps then compare the process — and outcome — to ArcGIS web version or desktop. The noob version of Google Maps is a terrible instrument for a project like this, but one frequently taught to non-coders and novices.

My first introduction was at a data journalism course, mapping butterflies. Oh the seductive, destructive tutorial: in that example, the spreadsheet was already populated (ha!) and the project entailed importing the spreadsheet, tweaking the color of the icons and adding one or two photos to the final map. Neat! 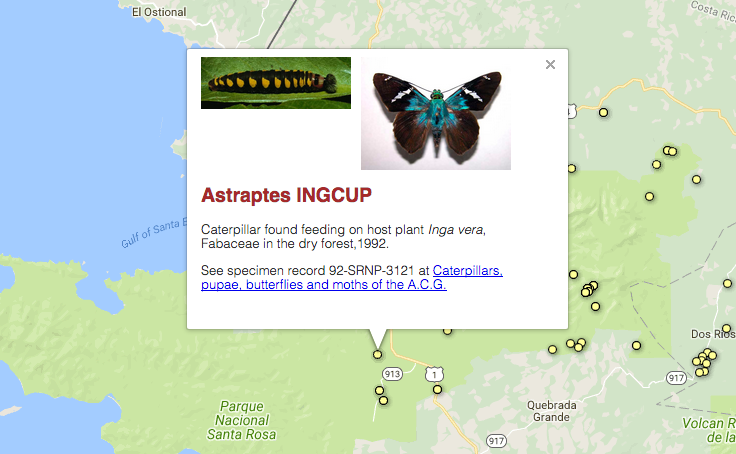 The first obstacle in the real world: the UNESCO list is not structured in a spreadsheet-friendly way. Fine, just copy and paste the Wikipedia table of winners into Google Sheets. But, duh, information from that table links to internal Wikipedia pages, not the official UNESCO pages.

Well, not a total loss, why not just scrape the links from the UNESCO pages? Nope. The UNESCO pages don’t line up with Wikipedia — Macedonia, for example, sits between Switzerland and Turkmenistan as “The Former Yugoslav Republic of Macedonia.” So after various attempts, that was scrapped for scraping the UNESCO site. Which worked out until I realized that for the final map, the photos and videos have to be added to the map – instead of importing directly from the spreadsheet. (If Stackoverflow failed me and you know how to make this work, pretty please email me.)

Then it was time to look at the descriptions: too long for the pop-ups and larded down with diplo cruft. For example: “Kok boru, a horse game, is a synthesis of traditional practices, performances and the game. The game is played by two teams on horseback, who compete by trying to score as many ‘ulaks’ (a mould in modern-day games) into their opponents’ goal as possible. The element is an expression of the cultural and historic tradition of its practitioners and unites communities regardless of social status. Related knowledge and skills are primarily transmitted through demonstration, as well as during festive and social events.”

Huh? Google it and you’ll find out that some folks outside diplomatic circles call it “dead goat polo.” The “ulaks” are goat carcasses and “mould” they refer to are stand-ins for the carcass –think a badly-stuffed pillow. Now there’s a much clearer idea of what UNESCO is setting out to safeguard. 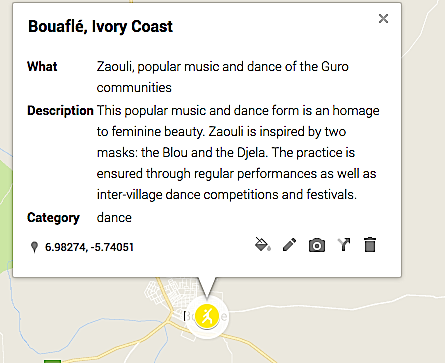 Also, unless the map was just a series of points, the intangibles need classification and that meant judgement calls on what was an art, a food, a craft etc. Then icons can be customized, sure, but Google offers a limited selection (the “dance” icon looks more like yoga, unless we can all agree that the universal symbol for dance is now striking a pose “Saturday Night Fever” style?) and importing images for them is trial-and-error — Google doesn’t offer specs for these (size? resolution? SVG?) and after puzzling out that they’re 92×92 pixels the imported ones are still somehow fuzzy.

And do those “candles” say “ritual?” If not, what would – that doesn’t imply a specific ritual? Still unsatisfied with this solution, especially because it’s the most frequent symbol on the map. Likewise, the symbol for craft (scissors) is sub-optimal but the call was either chose a Google icon (less fuzzy) or go with something more sophisticated but blurry.

Next time, I’ll start with the end in mind.