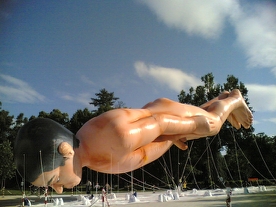 A giant naked man floats face down in Milan’s Sempione Park. Looking a little like Mr. Bean and slightly deflated in the privates, “Balloon” is a work by Polish artist Pawel Althamer. The 21-meter long work is a self-portrait.

No competition for the enormous memento mori lying next to the Duomo, it’s part of an exhibit called “One of Many” on in the park until June 5.

The show is sponsored by the Fondazione Trussardi, where someone has a thing for hovering art: namely the infamous hanging children installation by Maurizio Cattelan which were “freed” by an upset construction worker.

The current suspended work is unlikely to cause such controversy, though it would be kind of fun to take a pin to it.

Update: Daily Corriere della Sera reported on Saturday that an unnamed 40-year-old man (“perhaps a foreigner?” the journalist wonders) took a pair of scissors to the “nude doll.” No harm was done and organizers minimized the episode.