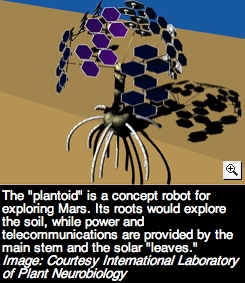 At the International Laboratory of Plant Neurobiology (LINV), about seven miles outside Florence, Italy, Mancuso and his team of nine work to debunk the myth that plants are low-life. Research at the modern building combines physiology, ecology and molecular biology.

“If you define intelligence as the capacity to solve problems, plants have a lot to teach us,” says Mancuso, dressed in harmonizing shades of his favorite color: green. “Not only are they ‘smart’ in how they grow, adapt and thrive, they do it without neuroses. Intelligence isn’t only about having a brain.”

Plants have never been given their due in the order of things; they’ve usually been dismissed as mere vegetables. But there’s a growing body of research showing that plants have a lot to contribute in fields as disparate as robotics and telecommunications. For instance, current projects at the LINV include a plant-inspired robot in development for the European Space Agency. The “plantoid” might be used to explore the Martian soil by dropping mechanical “pods” capable of communicating with a central “stem,” which would send data back to Earth.

In addition to studies on the effects of music on vineyards, the center’s researchers have also published papers on gravity sensing, plant synapses and long-distance signal transmission in trees. One important offshoot of the research activity is an international symposium on plant neurobiology. Next year’s meeting will be held in Japan.