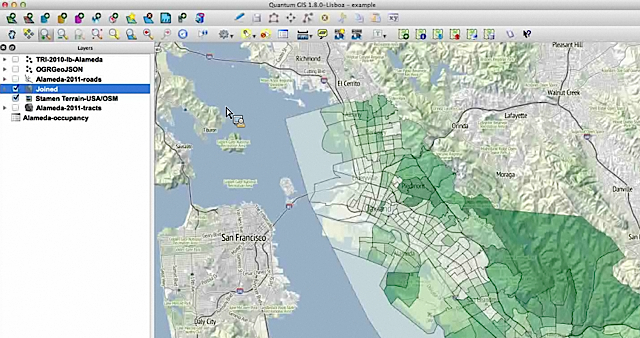 “It’s not for the faint of heart. But there’s a lot of drag and drop, something most of us can do,” he said in the hour-long session to a group of around 60 global journalists. “You do have to build up some muscle memory on how this works, but it will make your data mapping much more robust.”

Part of its appeal for journalists: if your raw data isn’t in a Google Fusion-friendly KML file, you don’t have wait for someone else to do it or find another source. (The US Census Bureau, that treasure trove of maps, offers exports of their data in shapefile format.)  You can import it in QGIS “get rocking and rolling” with the analysis De Groot says and then export in KML or SVG formats if you need to.

The class was the last installment in a four-part series of free data workshops for journalists – you can check out webcasts online here.

He walked through some maps with US census data – with a few clicks he created detailed map of Alameda county and overlaid it with Stamen’s terrain maps for the above example. Neat, right?

I’ve taken a few KDMC data classes online and in person, and always find De Groot’s hands-on approach helpful. He’s that mild-mannered guy from the design department who brings up some objection that seems useless but let him have it his way, whatever – then you see your story live and invite him for drinks to apologize.

Up next for me: slogging through the KDMC QGIS basics tutorial.

If you try it, let me know how you get on!