Giuseppe Salvatore Riina, an entrepreneur who tried to get a “Mafia-free” certificate, was arrested for getting involved in the real family business.The 25-year-old Riina, son of infamous “boss of bosses” Tot? Riina, received an early morning wakeup call from Palermo police charging him with Mafia association.

Crimes were classics of the Cosa Nostra trade: extortion, money laundering, drug trafficking and rigging public-works contracts. Among the 21 arrested with Riina were several prominent Palermo businessmen.
Giuseppe (also called Salvo) and his sister Maria Concetta made news recently for advertising an agriculture machinery business on the Corleone city web site. Although the site was ordered shut down by court, the banner is still on the city’s home page. Giuseppe also appealed Italian courts for refusing to give him a “Mafia-free” business certificate. Giuseppe wanted certification that the business was clean from Mafia ties to dispel public suspicion. After a two-year investigation, authorities discovered that operations were, in fact, a front for the family enterprises.
Father Salvatore “Totò” Riina is currently trying to appeal multiple life sentences. He’s serving time for organizing the 1993 bombings of the Uffizi, which killed five and injured 29, as well as the car bombings that same year in Milan and Rome. Older brother Giuseppe has been in jail since 1997 and was condemed to life in 2001 for four murders committed in Corleone.

Related Resources:
Midnight in Sicily
An intoxicating blend of Italian art, crime, food, history and travel, “Midnight in Sicily” is a fascinating account of events leading to the trial of Giulio Andreotti, seven times prime minister of Italy, for the killing of a journalist and for his association with the Sicilian Mafia.

Listen in to Italian Reggae
The good vibes from Italy are plentiful — check out the mellow sounds from groups like Africa Unite, Sud Sound System, Pitura Freska, Chop Chop, Reggae National Ticket and Giuliano Palma and the Bluebeaters…
http://guide.supereva.it/intrattenimento_e_spettacolo/interventi/2002/06/106412.shtml

Scala Museum Reopens
A few months later than promised, the collection of opera paraphernalia — including Lizst’s piano, Toscanini’s baton — is open to the public in a temporary location while the theater is being renovated for around three years. Across the street from Santa Maria delle Grazie (where Leondardo’s Last Supper lies) it’s a worth putting on the itinerary for a Milan stop — the stately palazzo adorned with neoclassic frescos is worth a look in itself and the surroundings are much less cramped than the original museum…Open Tuesday-Sunday from 9 a.m. – 6 p.m. Palazzo Busca, C.so Magenta 71. Tel. 02.43353521 Tickets 5 €
www.teatroallascala.org/eng/attualita/museo/museo_scala1.htm
For a virtual tour of the collection & Palazzo Brusca…

Racy Italian (Car) Models
BBurago makes some of Italy’s best-known cars — in miniature. So if you haven’t the pocket change for that Lamborghini, check out the small scale type… In English & Italian.
www.bburago.com 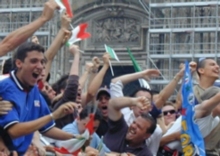 Italy may be a nation founded on work but employers fear passion for World Cup soccer may lead to mass abandonment of the workplace.
Just about anything short of changing the first article of the Italian constitution will be tried to keep workers from cutting out to watch soccer matches.

If the June 2 match, in which Italy trounced World Cup debutante Ecuador broadcast midday in Italy, is any measure it will become increasingly difficult to find anyone at work when the games are on.
An estimated 30,000 rushed to the main square in Milan alone. We spotted mechanics, construction workers, business people and teenagers.
“I just took a late lunch and won’t go back until it’s over,” said security guard Salvatore G.,36, who asked not to publish his last name, standing in front of the maxi-screen in Milan’s piazza Duomo. “I’m not really worried about getting caught — pretty much everyone did the same thing.”
This year because of the time difference between Korea/Japan and Italy most games that see “the blues” (gli azzurri) in action air around breakfast time in Italy.
Workers at Fiat factories will be able to take short “soccer leaves” of a few hours, a solution also chosen by the regional government of Catanzaro. Fanatics will then make up the time after the tournament. In Val D’Aosta, the hours of city offices open to the public will change according to the schedule.
Some try to curb workers skipping out by installing TV sets in the work place — a survey by Milan’s Chamber of Commerce reported that 25% of local companies had set up a World Cup viewing area. Not all employers can let workers take time off, some are taking preventative measures like blocking sports websites and requests for vacation time.
Fortunately for some, the question doesn’t arise. “I really only enjoy the games with a huge crowd like this,” said Silvia Manin, 47, during the Italy-Ecuador match in the piazza. “But I only work part-time so there’s no problem. This time around, I’m World Cup lucky.”

Many Italians can’t remember when fireflies brightened summer nights, but scientists say the luminous insects are making a comeback this season.
“We must thank biologically-friendly agriculture, which has exploded recently,” said professor Francesco Petretti of the University of Camerino, who studied the phenomenon. “Farmers are using fewer pesticides.”

Italy is the top producer in Europe of organic food (54,000 companies) with the most extensive amount of land organically cultivated at 2,965,620 acres. Organic produce, generically called ‘bio’ in Italian, makes up 2.4% of the national diet.
Scientists consider fireflies — called ‘lucciole,’ also slang for prostitutes — a sign of a healthy ecosystem. The insects, whose yellow glow is a product of protein intake and used as a mating call, live in unpolluted grass, bushes and hedges. The first fireflies were spotted in coastal regions in May, by scientists predict by July they’ll light up the rest of the Bel Paese countryside.

Late film director PierPaolo Pasolini decried the disappearance of fireflies, provoked by the industrial boom in the 1950-60s, in a well-known essay. "At the beginning of the sixties, the fireflies began to disappear in our nation, due to pollution of the air, and the azure rivers and limpid canals, above all in the countryside.." Pasolini wrote. "Today this is a somewhat poignant recollection of the past—a man of that time with such a souvenir cannot be young among the young of today and can therefore not have the wonderful regrets of those times."

Prada’s new Luna Rossa boat
The latest in high-tech sailing was just baptized by fashion maven Miuccia Prada, it’s now set to gear up for competition in the America’s Cup next fall in New Zealand. Read all about the 26-meter e.90 million boat, in English or Italian.
www.pradalunarossa.com

Soccer, “pallone” is the national sport and a national obsession every four years when the World Cup comes around. Ever since Silvio Berlusconi co-opted the hurtling cry “Go Italy” (Forza Italia) for his political party and peppered speeches with increasingly sporty metaphors (“scendere in campo” is another favorite) Italians have become a little more shy of using soccer terms in daily life. Here are some that continue to stick around.

More on everyday language? Try the Dictionary of Italian Slang and Colloquial Expressions 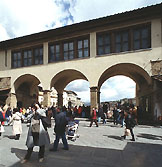 For the second year in a row, the city of Florence will allow visitors to take the “Path of Princes.”

This priviledged walkway was constructed in Renaissance times to keep the ruling Medici family head and shoulders from the riff raff — and the smell of hides soaked in urine being treated on the city’s famous old bridge.

The walk leads from Palazzo Vecchio walking above the Ponte vecchio (in the evocative Vasari Corridor, usually closed to the public) and on to wind up at the grotto in the Boboli Gardens on the other side of the Arno. Visitors will be able to see a virtual reconstruction of the corridor, which sustained damage in the 1993 mafia bombing, the way it appeared when commissioned by Cosimo I dei Medici in 1565. At the end of the two-and-a-half hour tour, visitors can stroll around the Boboli gardens.

The Rub
Visitors will be able to walk the princely walk from June 3 – July 13 and from Sept. 6 to December 28, 2002. As with many of these special initiatives, getting in is half the battle — but trust us it’s worth it. Visits can be made on Fridays and Saturday mornings. English-speaking guides available for groups.

Related resources:
Companion Guide to Florence
A thorough yet entertaining guide to the city’s art treasures and history…

The Axum Obelisk in Rome, a much-contested Ethiopian treasure, has been shattered into pieces by lightning.
Taken by order of Benito Mussolini in 1937, the Ethiopian government has been trying to get it back for over half a century. Lightning struck the deserted piazza around 1 a.m., probably attracted as much by the shape as the steel braces added when the monument was transported.
More than 1,000 years old, the monument once crowned the city of Aksum, then center of trade in ivory, animal skins and grain in the ancient Ethiopian empire.

The Obelisk was the latest in a series of heated arguments for return of stolen art — one that found Italians as the accused. Owning over 60% of the world’s art treasures, according to UNESCO, usually places Italy in the position of petitioning for its own looted treasures. One recent example: after years of negotiations, the Getty Museum in California was prevailed upon to return 500 terracotta and bronze pieces to a Calabrian museum in 2001.

Foot-dragging by Italian authorities meant that agreements to return the obelisk to Ethiopia, signed as early as 1947, never amounted to action. Italian government officials, most vocally Vittorio Sgarbi, have protested the restitution both because of political instability in the African region as well as complications in shipping the 178-ton monument.

Placed at the center of piazza di Porta Capena, close to the Circus Maximus, Italian Culture Minister Giulio Urbani told newspapers the 78-foot sculpture will be restored and sent home.

www.ethiopiaonline.net/obelisk
More on the history & protests…

For the fourth year running hundreds of would-be gladiators from all parts of Italy met in Alessandria (Piedmont) for a three-day “Roman Fest ” held the last weekend of May.
In addition to parades, feasts and didactic programs for children, the
reenactment featured a slave market with Roman currency.
"It will be possible to see, but also participate in the classic slave
market, particularly fashionable in the Roman Empire," recites the program. Slave owners, it points out, are only entitled to an "unusual chat" at the Roman inn on fairgrounds.
Officials also softened up the bloodthirsty nature of the gladiator bouts, by emphasizing that contestants- winners or losers -are expected to leave the ring on their own legs and not on a stretcher, as "times – in good or bad – have changed. "

Rapid changes after the postwar period are in turn responsible for revolutionizing Italian eating habits, breaking some long-standing stereotypes. In the early 1950s, the Italian mamma spent a good chunk of her day preparing a hearty lunch, while her new millennium counterpart, less likely to be a stay at home mother, spends just a third of that time in the kitchen.
Fifty years ago, Italians spent half of the family income on food, in recent times it takes up some 20% of the budget. Meat consumption has more than tripled, while wine drinking has been cut by half. According to the study by Federalimentare, Italians are on average 15 centimeters taller, live between 13-15 years longer and around half are overweight.
Some staples of the Italian postwar diet that have now disappeared include smoked herring (often eaten with polenta), tinned milk and carob beans (sucked like candy).