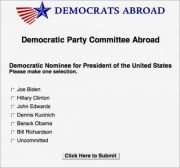 MILAN, Italy — For the first time, Democrats living abroad from Auckland to Ontario are voting over the internet in a global primary. And a few states may allow expatriate voters to vote online in the general election come November.

For now, expat voters will, in effect, add an extra state to this year’s Democratic National Convention. These voters without borders will elect 22 delegates, weighing in with about as much influence as Montana or South Dakota.

Voting is currently open only to Democrats. Republicans Abroad split off from the Republican National Committee and can hold neither in-person nor internet votes in the primaries. For the estimated 6 million Americans who live overseas, red tape and the vagaries of far-flung postal systems leave traditional paper absentee ballots with all the accuracy of a message in a bottle.

Americans abroad requested nearly a million ballots in 2006 elections, but only about a third were cast or counted, according to a government report.
More from Nicole Martinelli at Wired News.