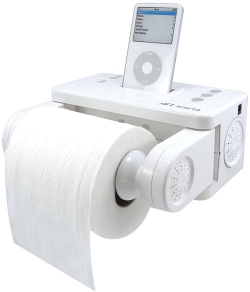 Holds toilet paper and an iPod, but is it an alibi for murder?

In 2007, British student Meredith Kercher was murdered in Italy, during a study abroad program in hill town Perugia.

About a year later, Rudy Guede was sentenced to 30 years for his part in the killing, for which Kercher’s roommate, American student Amanda “Foxy Knoxy” Knox and her boyfriend, Italian IT grad, Raffaele Sollecito, are still awaiting trial.

Guede’s appeal now before the Italian court hinges on an iPod.

During what has been hypothesized was some sort of late-night Halloween sex game where the 21-year-old Kercher was an unwilling participant, Guede maintains he was in the bathroom of the young women’s apartment.

While she was being killed with a knife, he was listening to music on iCarta, a toilet paper holder roll that doubles as an iPod dock.

Guede’s lawyers tried to head off what they thought might be viewed as a sort of Twinkie defense for the digital age in a statement to Italian media (below translation mine):

“It is nothing more than a confirmation of how some abnormal behaviors are apparently normal among young people today,” said laywers Valter Biscotti and Nicodemo Gentile. “Just as Facebook is their virtual world, they now listen to music everywhere, even in the bathroom. The marketing of such products implies a certain routine use.”

The statement was published without details on how the defense team might further the bathroom defense in court.