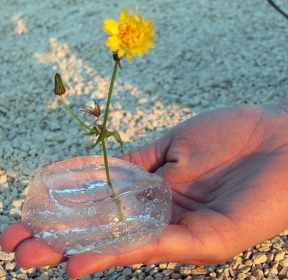 Italian scientists are testing a new diet pill that turns into a clear, gelatinous blob the size of a tennis ball that may help shrink waistlines by giving dieters a sense of satiety.

The pill, currently undergoing clinical trials at Rome’s Policlinico Gemelli hospital, would be downed with two glasses of water at the first sign of a stomach rumble.

“The effect is like eating a nice plate of pasta,” said Luigi Ambrosio, lead researcher on the project at the National Research Council’s Institute for Composite and Biomedical Materials in Naples. “If you sit down for a meal with a stomach that already feels full, you’ll end up eating less.”

The unnamed pill is made from a cellulose compound of hydrogel, a material that’s powdery when dry but plumps up to a cousin of Jell-O when wet. The gel can soak up to 1,000 times its weight. A gram in capsule form quickly balloons from the size of a spit wad to a ball that holds nearly a liter of liquid. Ambrosio and fellow researcher Luigi Nicolais, now minister for reform and innovation, noticed the burgeoning girth of Americans during a trip to the United States in the ’90s.

The pair had been working with a team to develop super-absorbent materials and wondered whether a hydrogel could produce an effect similar to gastric banding — without the surgery.

Along the way, they discovered the spongelike material could be used to treat edemas, and are currently experimenting with it as a way to slow-water plants. The versions of the material for use in the diet pill is biocompatible, so the body just flushes it out, the scientist say. Full story by zoomata editor Nicole Martinelli on Wired.