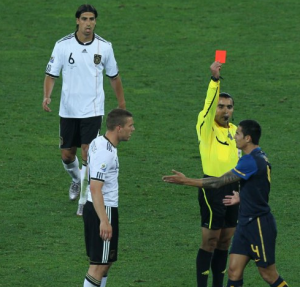 It won’t be able to change the contested calls in the World Cup, but scientists at Italy’s National ResearchÂ  Council are working on a host of non-invasive solutions that would help referees judge games.

In Bari, at the Institute of Intelligent Systems for Automation (Issia), researchers are perfecting a prototype system that has already been tested on the field for games of the Udine team.

It’s basically about 10 high-speed cameras in what are typically referee blind spots. There are four cameras aimed at catching “phantom” goals and either six or eight to judge those ever-shifting offsides violations.

The high-speed cameras capture about 200 images per second and are fully automatic. They can record, process and transmit video sequences in just a few seconds and send results wirelessly to the linesman.

It’s about time to end these hair-pulling, damning-the-ref moments, right?

But until now there has been a lot of resistance to implementing these systems.
Back in 2004, I wrote about a similar computer-based system that Italian researchers were hoping the national teams and FIFA would adopt for Newsweek.

I had no idea that it would be such a controversial story — with Italian league officials refusing to speak about it and the FIFA flak brushing off the idea of tech referee help by saying, “Football is a game played by humans that should be judged by humans.”

Another concern — that didn’t make it into the article —  was that these systems would be so expensive that some countries wouldn’t be able to afford them, resulting in a de facto major league based on economics. It would ruin the global aspect of the sport if the games were judged more precisely and differently in just a handful of countries where the game is played.

After forcefully resisting technology, now at least FIFA president Sepp Blatter is willing to consider it, telling AP it’s time that “we have to open again this file, definitely.”