This isn’t the first time Frank Welte finds himself in front of an audience that doesn’t know how to read a map. He stands up and presses the thick 11” X 11.5 paper map across his torso on a diagonal. The right hand holds one corner steady; with the left he navigates a slice of San Francisco’s South of Market neighborhood.

“The first thing I’ll do,” he tells the assembled graphic designers, user experience experts and urban planners during a two-hour workshop, “is start at the upper left, to see what the title of the map is, find the scale and locate north.” This three-page black and white map shows the area around Market Street where Welte, who is blind, works as an accessibility media specialist at LightHouse for the Blind and Visually Impaired. Without adding a crinkle to his blue dress shirt, he speeds to the center of the map for the “you are here” cluster of dots in a circle, finds Market street and starts tracing parallel streets, using the key on the pages behind it to locate street names. 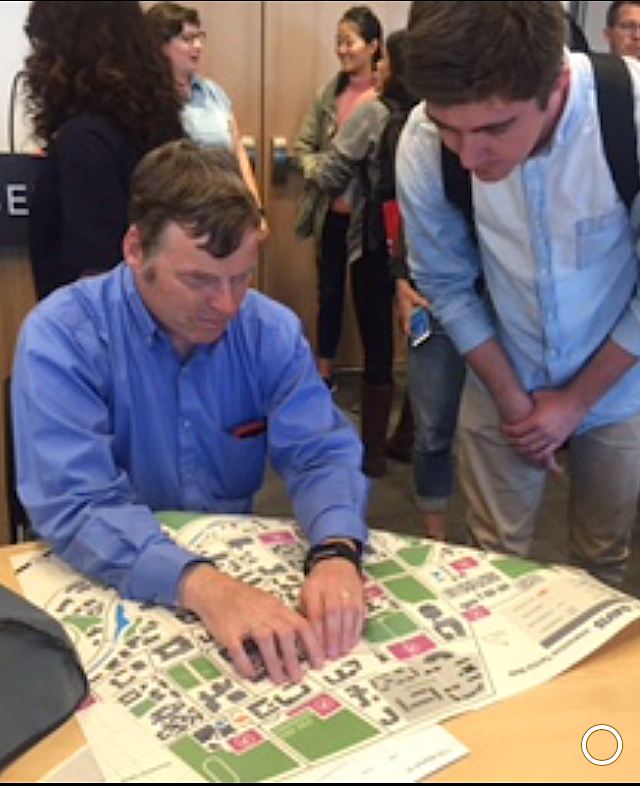 Participants at the workshop, held during San Francisco Design week, learned that just how many people could benefit from tactile maps depends on how you define vision loss, as well as when the survey was taken. An estimated 25.5 million adult Americans (or about 10 percent) reported they either “have trouble” seeing, even when wearing glasses or contact lenses, or that they are blind or unable to see at all, according to 2016 National Health Interview Survey (NHIS) data. Worldwide, there are 253 million visually impaired people.

Navigating your surroundings, however, is a basic right that isn’t yet recognized even by the Americans with Disability Act (ADA). However, to participate in today’s society you need access to information, says Greg Kehret, director of LightHouse’s Media and Accessible Design Laboratory (MAD Lab). Whether it’s using a microwave, the washing machine, or an ATM, the blind or visually impaired get “cordoned off through bad design.” Braille and tactile maps have proven useful but until now have been difficult and costly to design, manufacture and distribute.

The San Francisco-based nonprofit, LightHouse for the Blind and Visually Impaired, wants to change that with Tactile Maps Automated Production (TMAP), a tool for on-demand tactile street maps. Developed with the Smith-Kettlewell Eye Research Institute, TMAP is an accessible, web-based app that uses Google maps search information and OpenStreetMap data to generate tactile and visual representations of streets centered on a user-specified location. Using design parameters to ensure tactile legibility, TMAP quickly and cheaply generates tactile map files compatible with a variety of printers and embossers.

The lack of awareness about the importance of tactile maps has created some design challenges along the way. For starters, there are no established universal symbols for these maps. “If you put your hands on a tactile image and you don’t have any training, it can feel like just a mass of lines and be very confusing. We’re here to make it less so,” says BJ Epstein, a project manager at MAD Lab. Using the idea of abstract concepts rather than mimicking real-world objects, the team has crafted tactile maps and wayfinding tools for clients including UC Berkeley, Bay Area Rapid Transit, Calgary Transit System and a number of music festivals.

Detail of a TMAP, via LightHouse.

Take, for example, a typical transit station: “There are rectangles for signs, there are rectangles for shelters, there are rectangles for benches. That’s too many rectangles! So circles represent benches,” Epstein says, adding that they aim to keep symbols consistent across projects. Scale is also less important than it would be in a traditional map, she says. A ticket machine might be about the same size as a staircase – because all the symbols are designed to fit on a fingertip. “We want to use symbols that aren’t bigger than that because that makes it harder to read. Smaller,” she adds, “and it’s harder to discern differences.”

Then it came time to test the skills of workshop participants, with a five-page booklet with the phrase “Do not open. NO PEEKING!” printed across the top. Eyes scrunched shut, we sat at round tables first trying to distinguish basic shapes before moving on to a simplified tactile street map. After failing to successfully identify all but the most basic shapes and mistaking a staircase for a taxi stand, your correspondent felt a rush of appreciation for people who must rely on tactile maps.

“The blind and visually impaired don’t just want empathy, they want practical solutions,” Greg Kehret says. “By showing what’s possible and making it available to as many people as possible, we’re changing expectations around what is reasonable accommodation, really raising the bar above and beyond.”

TMAPS maps are available online at http://LightHouse-sf.org/tmap/
Along with three versions of the map (simple, moderate and dense map scale) buyers get a tactile map key and an introduction to using tactile maps.

This article first appeared in the September 2018 edition of “Calafia,” the California Map Society journal.