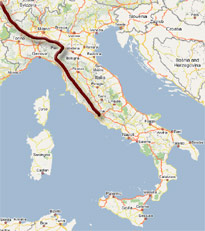 Fellow reporter and friend Eric Sylvers is on a one-man trek to rehabilitate Italy’s forgotten
Via Francigena.

Unlike Spain’s Camino de Santiago, this major pilgrimage route to Rome during Medieval times has been all but abandoned by walking enthusiasts.

Hard to blame them: unlike the Spanish trail, this one is often unmarked and not set up for bare-bones pilgrim travels.

Eric hopes to change some of that.

Follow his progress in the blog account of the 560-mile walk from Switzerland to the Eternal city — blisters, swollen tendons and memorable meals included — it’s an addictive read.

1 thought on “Italy’s Pilgrim Route on Foot: The Via Francigena”