While many look to the capital of Denmark as a Nordic idyll where the drin of bicycle bells outnumbers the blare of car horns, Henderson says it went through the same political fights to get there. “It’s not a magical unique place, actually, and that opens up the doors to possibility,” says Henderson, who spent a 2016 research sabbatical in Copenhagen and has a forthcoming book about the two cities.

Speaking at a recent Nerd Nite, Henderson gave some gears to grind as San Francisco heads into June 5 elections. Politics matter – how streets are configured, how much car ownership is taxed, how much space is allocated and protected for car parking and who decides these issues – and the daily habits of politicians matter, too.

“It’s important if we’re going to have not just a bicycle city but a truly sustainable transportation city,” he says. The problem? Few San Francisco politicians are really behind the bike as a method of transportation.

Showing tweets the mayoral candidates took for bike-to-work-day photo ops he says that “none of these people actually ride bikes here, and I can say that because I know them.” By contrast, he showed a photo of packed bike racks outside the Danish parliament. “What’s important in Copenhagen is not just political ideology but that many of the actual decision makers cycle regularly, so they understand the nuanced subtleties of cycling that encourage people to cycle.”

The key, he adds, is to move the discussion from culture (as in California has a car culture, “you can pry these keys from my cold head hands”) to politics. San Francisco may have a lot of progressive ideas around transportation, but on this side of the pond, those ideas get commodified (as in liveablity or walkability scores that help move real estate), with the assumption that the market is the best way to organize mobility. 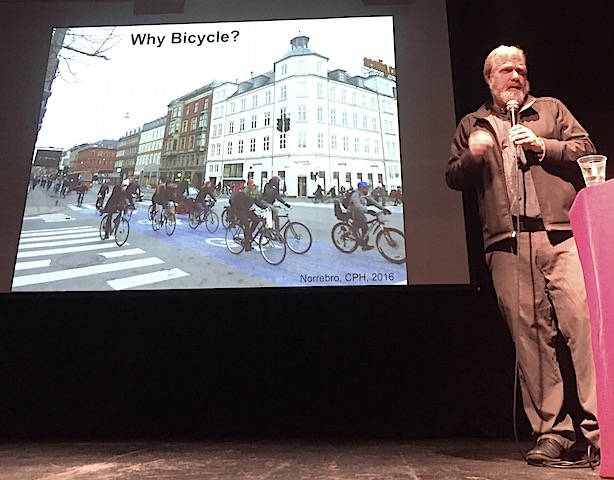 He offered up some compelling data comparing the two cities. “Throw away your density goggles,” he says, noting that density per square mile between the two is almost identical, but hard-won transportation fights mean that Copenhagen today has about 29 percent of all trips by bicycle, one of the highest rates in the world. Henderson points out that also means that 71 percent of trips are not by bicycle — but even so Copenhagen’s carbon emissions are half those of San Francisco. San Francisco has a rate of 476 cars per 1,000 residents while Copenhagen has 200. Some 70 percent of households in Copenhagen don’t own cars, in San Francisco the rate is 30 percent.

San Francisco’s cycling rates aren’t growing — despite having a much more hospitable climate than Copenhagen and with most trips a manageable stretch of less than three miles and in flat areas. The author of “Street Fight: The Politics of Mobility in San Francisco” concludes that “there’s something wrong, there’s something not working.”

He says the aspirations for cycling in San Francisco are “underwhelming and dismal, actually” showing a slide with the predicted rises in public transportation versus biking: while all trips of the SFMTA are expected to grow to 20 percent by 2030, biking in the Bay Area is predicted to go down from an already paltry 1.2 percent to 1.1 percent, according to the 2017 Plan Bay Area Draft Environmental Impact Report.

While a proponent of public transportation, Henderson notes that bike infrastructure is inexpensive and can be rolled out without much in the way of long-term fixed capital investments. “All you’ve got to do is reallocate the street, that’s easier said than done but the operating costs are minute compared to operating public transit.” 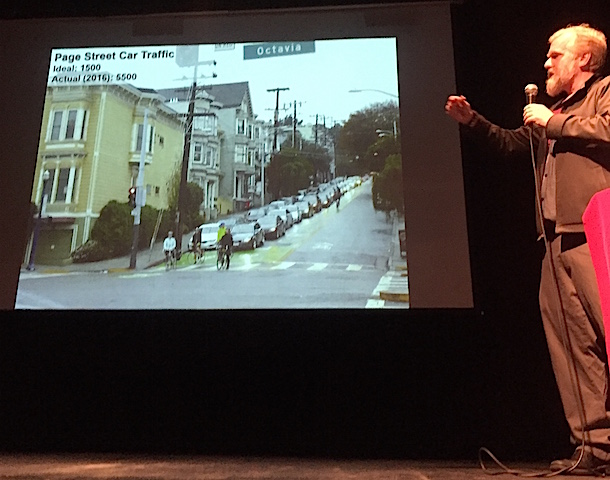 To demonstrate the everyday obstacles faced by the few who cycle today, he shows a photo of the bike lane on Page street near Octavia. Instead of providing a safe path to downtown for cyclists, it’s become an over spill route for cars from Oak Street heading to the freeway. The “ideal” traffic for Page was set at 1,500 cars, but in 2016 some 5,500 used it during rush hour.