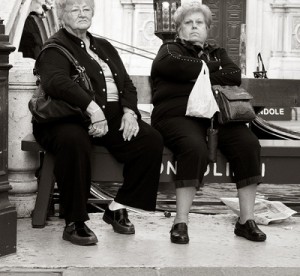 Meddling mother-in-laws have been the basis of jokes, pop songs, and heartbreak probably since men dragged their young brides back to the family cave.

One enterprising Italian priest, convinced that in-laws are behind the country’s increasing divorce rate, has devised a class to teach them to help rather than wreak havoc on their children’s relationships.

Called “Families in Dialogue – How to be Effective Parents to Married Children,” the course is taught by three psychologists and is open to both male and female in-laws.

Held over the course of three weekends in the northeastern city of Udine, sessions are dedicated to such hot-button topics as surviving Sunday lunch (a little over half of Italians still meet for this weekly ritual) and negotiating babysitting duties.

The idea for the anti-meddling class grew out of the problems that Don Giuseppe Faccin had while teaching pre-matrimonial classes.

“Statistics show very clearly that at least three out of 10 Italian marriages are in crisis due to the in-laws,” Faccin told local daily Il Messagero Veneto. “Sometimes the problem is both in-laws. More often than not, we have to work on the relationship between the parents.”

Strong ties in Italian families are often at the root of the problem: at age 29, 70% still of Italian men still live at home and even when they leave the nest, one in three talk to la mamma every single day.

“When children get married, parents should regain their own balance as a couple again, but often they’ve spent so much time caring for adult children that they don’t know how,” Faccin explained. “So they throw their energy into their children’s marriage, intervening in ways that aren’t helpful. Even as grandparents for lack of other projects and ways to spend free time they end up interfering more than helping.”

You have to wonder if a truly invasive in-law would sign themselves up for such a course, though.