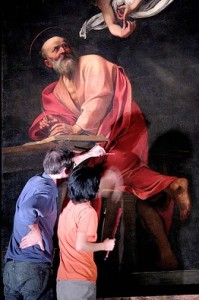 Last fall, a group of specialists worked late into the night, perched on scaffolding in a Roman church, trying to copy Caravaggio’s “Inspiration of St. Matthew,” rendering the image true right down to the subject’s dirty feet. Every night for two weeks, they set up a scanner to photograph the Contarelli Chapel paintings, part of a project to make a facsimile of the baroque master’s works for a research center in Caravaggio slated to open this September.

Meanwhile, two years ago in Venice, a lifesize facsimile of Paolo Veronese’s monumental work “Wedding at Cana” drew 20,000 visitors in three months, while the real 16th-century masterpiece is often ignored by tourists waiting to see the “Mona Lisa” at the Louvre museum in Paris.

Another state-of-the art copy — of Leonardo da Vinci’s “Last Supper” in Milan — attracted nearly 55,000 visitors to an exhibit so popular the dates were extended twice. It was an unexpected hit born out of compromise. Director Peter Greenaway was asked to create a short film to project over the original Renaissance fresco at Santa Maria delle Grazie but officials got cold feet about crowds and conservation. His 20-minute short was projected only once over the original to a handful of dignitaries during the 2008 International Milan Furniture Fair. Shown over a high-resolution copy at nearby Palazzo Reale, the installation stayed open for five months.

Whether to rewrite history or reinterpret masterpieces, replicas made with a palette of high-tech tools are changing the way tourists see art.

All three of these faithful fakes are the work of Madrid-based Factum Arte, a company that employs high-resolution 3-D scanners of its own devising to reproduce artworks.
The scans result in thousands of files whose images are stitched together, then churned out by flatbed pigment printer onto canvas primed with historically accurate paints. To get the clone closer to the real thing, conservators fill in any ridges or creases from manhandling or restoration by hand afterward.

Founded by painters Adam Lowe and Manuel Franquelo, Factum Arte now employs 30 specialists, with offices in London and Madrid. The pair’s first major project was a facsimile of Spain’s Altamira cave completed in 2001. The cave, whose ceiling dances with Paleolithic drawings of animals, closed in the late 1970s because carbon dioxide was destroying the Unesco heritage site.

“We had to overcome a lot of prejudice at the beginning,” said Mr. Lowe. “There were a lot of bad, theme-parky copies made in the ’60s and ’70s. We’re not making big posters. We now have the technology that can give people an emotional double-take.”

Mr. Lowe imagines a near future where facsimiles substitute some real attractions that are too fragile to endure the harmful carbon dioxide from the mouths of awed tourists.

Factum Arte’s most ambitious project, recreating the tombs of Menmaatre Seti I, Nefertari and Tutankhamun in Egypt’s Valley of the Kings for the Supreme Council of Antiquities, or SCA, may be where this future takes shape.

“Here, tourists concentrate on visiting certain tombs — especially the tombs of Tutankhamun, Ramesses VI, and Horemheb — while others are hardly visited at all,” said Zahi Hawass, secretary-general of the SCA, in a statement on his Web site last July. “This means that some tombs need added protection, while others need to be closed completely in order to save the ancient paintings.”

The Seti tomb has been verboten to the general public for conservation reasons since the late 1980s; Nefertari’s tomb is only visible by special appointment.

The replica burial chamber and sarcophagus of King Tut’s tomb will be the crown jewels at the renovated Cairo Child Museum. As the real tomb undergoes a five-year restoration begun in November 2009, visitors may find they get a better gander at the 3,000 year-old-paintings from the replica.

Meanwhile in Rome, the Factum Arte team is hard at work on the Caravaggio project. At 9:30 p.m., when most Romans are enjoying an after-dinner stroll, a team of four gets to work at San Luigi dei Francesi. The sacristy is a jumble of wooden equipment crates, tall gold candelabras, cables and paints that conservator Naoko Fukumaru mixes and holds up in swatches to the original to ensure the color, depth and finish are true to life.

After the work in Rome is done, a team of about 10 will travel around Italy, scanning Caravaggio’s works, for the research center set to open this fall in the northern town that gave Michelangelo Merisi his byname, Caravaggio. Nonprofit cultural institution Fondazione Giorgio Cini, also behind the Veronese project, backs the Caravaggio work along with local government.

“The work can be very repetitive. It can sometimes take us as long to scan the painting as it did for the artist to make the original,” said Gregoire Dupond, head of research and recording. “Here, for instance, the church floor is uneven and every 50 centimeters we have to make sure the scanner mast is parallel to the painting.”

The resulting in-depth look, one that many scholars would never otherwise get, can provide new insights. One such discovery: after scanning the three paintings in Rome, researchers believe that Caravaggio employed some kind of optical device to create the dramatic perspective that dazzled the art world — a theory that has long been debated.

The team found traces of incisions made on a preliminary layer of the canvas — here around the edge of a leg, there around a hand — perhaps evidence that the painter did, in fact, use guides to paint.

They’ll be looking for the same traces as they scan the next painting, “The Burial of Saint Lucy” in Syracuse, Sicily.

“In the end, we may have something very exciting,” Mr. Lowe said. “This is exactly the sort of data that can prove how exceedingly high-resolution recording can very quickly give a deeper understanding of a painting. You can’t do that with just a good copy.”

The story originally appeared in The Wall Street Journal Europe.