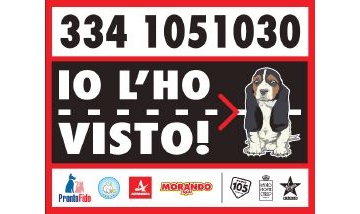 Summer in Italy means long vacations and, unfortunately, pets abandoned by the side of the road.

The numbers are chilling: every year in Italy an estimated 100,000 dogs are dumped by owners not willing to take them along or pay for a kennel when they go on holiday. 750,000 other pets, including cats, rabbits and turtles are also left to fend for themselves every year.

Eighty-five percent of abandoned pets die within 20 days on the streets, particularly in traffic accidents. In the last 10 years, abandoned animals have caused 45,000 road accidents, resulting in 4,000 injuries and 200 deaths.

Text messages are the latest strategy: if you see a wandering dog on the autostrada, text the animal rescue squad at 334 1051030, specifying kilometer and direction. The text alerts a network of 70 volunteer groups organized by animal association AIDAA.

Animal website prontofido launched the initiative, co-sponsored by Radio 105 (which has been running rap-like ads about it with brainwashing regularity) and Autogrill.

Launched late July, the service will be in effect until the end of August. The first weekend, volunteers rescued a pincher seven minutes after a text was sent near the Tuscan town of Lucca. (A reminder: if you see abandoned animals in town, alert the local police “vigili” by calling 112. They are obliged by law to pick up these animals and take them to a shelter).

Still, they are bracing for the peak period of mid-August holidays, or ferragosto, when most of the peninsula’s 60 million inhabitants take a break. In a country where there are more cell phones than people, a quick text might help save a few animals.