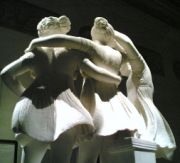 A young Italian woman swooned over a replica of Antonio Canova’s “Venus and Adonis” statue on display at a tourism fair.

Francesca Fraticelli burst into tears, then fainted after admiring the adoring glance of Venus and the gelid grace of the plaster copy — though hard to compare to the original 1795 work in marble — brought out to attract visitors to the Canova museum. (The finished version is housed in Geneva).

Fraticelli, who has a degree in art history, works as cultural attaché for the province of Chieti in the Abruzzo region. Luca Zaia, president of the Canova Foundation, helped her get back on her feet and escorted away from the statue. The next day, revived and perky looking with red-framed glasses, she nonetheless told Italian television news that she would avoid testing her mettle by looking at the statue again.

Symptoms including dizziness, palpitations and shaking normally associated with Stendhal Syndrome — first studied by Italian psychiatrist Graziella Magherini — are often reserved for foreigners unused to seeing so many beautiful treasures crowded together possibly also suffering from heat and the after-effects of a gelato high.

Like to test whether Italian art can produce a good fainting spell? Milan’s Palazzo Reale hosts a Canova exhibit with statues on loan from the Hermitage (including the much-awaited “The Three Graces“) until June 2.

Has art ever made you lose your head? Let me know in the comments…

5 thoughts on “Swoon-Worthy Canova on Show in Milan”