MILAN — Viagra, the drug that launched, ahem, a million jokes, is now a musical.
Pfizer Italy paid to create a fable for adults called “The Male Sleeping Beauty” to boost consciousness about the “difficulties of intimate relations between women and men in our times.” 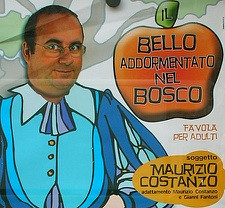 .
Why the Bel Paese? As a country with one of the oldest populations on the planet, the magic bullet aimed at over 65-year-olds is on fertile ground here. The drug is also used and abused by 30-something Italian stallions. Sex experts in newsweekly Espresso recently called them the “Viagra Generation,” describing pill poppers as egotistical mama’s boys, fragile and afraid of women.
When this new take on adult entertainment came to Milan during a 10-city tour, I wouldn’t have been anywhere but the front row. My date for the evening, an Italian friend who wanted everyone reading this to know he has never used Viagra, doesn’t need it and only agreed to go as a demonstration of devotion to me.
While Viagra may have moved mountains, “Il Bello Addormentato nel Bosco” had a hard time drawing a crowd. Despite being mid-week — and for free. About 60 people, many of them women old enough to have companions in need of Viagra, milled in the foyer looking surreptitiously to see who else thought spending a cultural evening with the blue pill might fun. (more below)

Before doors opened, we were offered some freebies suitable for geri-tainment — samples of Caffè Hag (decaf espresso) and copies of an anthology called “Love in the Time of Viagra.”
When the curtain went up on a rotund man dressed in turquoise tights at 9 p.m., maybe half of the 327-seat theater was full. The 80-minute show takes comic Gianni Fantoni through a nocturnal fantasy world where he is trapped because he can’t “wake up.”
This ‘Beauty’ is a bumbling, overweight everyman who wonders why “men who need love and women who want furs” always seem to find each other. His assortment of loves includes a voracious older woman and another who only wants to have sex in public. Watching my friend’s face to see whether he liked the jokes — his reaction was somewhere between half-smile and grimace — it occurred to me that the character wasn’t very sympathetic. You were supposed to identify with him, but ended up finding him a chump.
In between musings, Beauty is visited by “solitary pussies” of the past, women who pop out of the wings recounting the failings of men. They speak in rhymes, including a sort of mantra (“oppressed, repressed, depressed, now I lie under a cypress.”)
In this journey of self-discovery (where he sings “Fly me to the Moon” and the “Happy Days” TV theme dressed as Fonzie), Beauty will eventually “awaken” from his nightmare thanks to love. Anita, his childhood paramour, will show him the door leading out of this tormented limbo.
After applause, less tepid than I would’ve imagined, the curtain went down and a video screen dropped from the ceiling. No one moved when a five-minute school-type film about how rapid social changes (see woman ironing, see woman with briefcase) have altered relations between the sexes forever. The voiceover said something about women having higher expectations, becoming more demanding and the man who has the courage to go to a specialist will, too, wake himself up to the power of love.
Say what? Even the 30-somethings behind us, who had whispered that Fantoni was ‘bravo’ during the show and laughed honestly in most of the right places, didn’t quite get this last bit. That’s the rub, my friend sentenced. Pfizer didn’t think we’d really get the deeper meaning of the play, so they had to infomercial us just in case. Apparently they didn’t think “Beauty” that entertaining either.