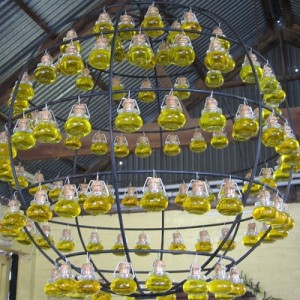 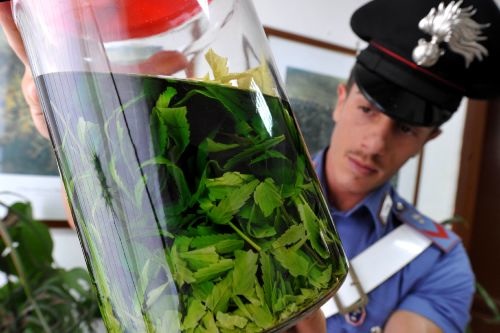 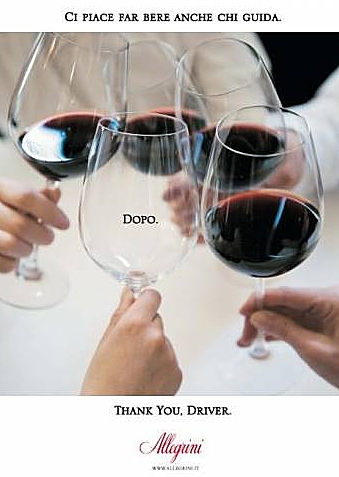 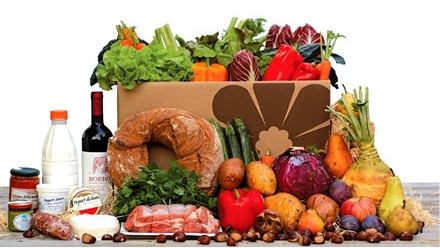 Just got the first shipment from Cascina Cornale, a farmer’s coop based in Piedmont that delivers weekly to northern Italian regions, including Val d’Aosta, Piedmont, Lombardy and parts of Liguria, Tuscany and the Veneto.

A friend of mine swears by it, otherwise it was the kind of good idea that given Italian execution would’ve stayed a good idea, rather than something actually tried out.

You pay for the month in advance, delivery is included. Clients either choose online what they want every week, it’s slightly more expensive if you choose, or you get a box of whatever’s in season plus a few basics.

Here’s what arrived in the 1-2 person “surprise” box, which costs €38, nearly $47 if you’re dealing in treacherous dollars.

About a pound each of two kinds of pears, apples, kiwis, turnips, spinach, a head of cauliflower, a head of radicchio, a big slice of pumpkin (soup or risotto? not sure yet) a liter of fresh milk, six eggs, a whole brown trout, a generous wedge of toma cheese, two small jars of plain yogurt, a pack of balsamic candies (perfect for the cold season), some red onions and a spot of lard.

Said friend warned me about the perils of the surprise box (anyone know what to do with a whole trout?) after I’d signed up. But on this rainy Milan day, I’m still glad not to have to go do the shopping.

Times may change but over half of all Italians still break bread together on long, big Sunday lunches.

Though brunch has made headway in Italy recently, especially in cities and among young people, 52% of the 1,834 families polled by the Accademia Italiana della Cucina (Academy of Italian Cuisine) still follow the Sunday lunch tradition.

The menu? Usually cold cuts and crostini for starters, then pasta and roast meat plus fruit, dessert and coffee.

“In an age where all food is the same and people cook less, Sunday lunch is a bulwark against fast-food and ready-made meals,” said Accademia president Giovanni Ballarini. “It’s an important ritual to keep families together.”

This prodigal spread is still usually prepared by women, though two out of 10 men claim they “lend a hand” for Sunday cooking. Younger generations, say the study, aren’t interested in cooking, but are happy to sit down and eat with the extended family.

The trouble with truffle intermingling? Scientists say it is one reason, along with environmental changes, that the prized tuber has become even more scarce in recent seasons.

Truffle cousins from Asia sprung up in European markets in the 1990s. Among them is the Tuber indicum from China, a close relation of the Italian black truffle, Tuber melanosporum. The two mushrooms share genes and have a similar structure and shape. Truffle conossieurs, willing to pay between €200 and 600 per kilogram (USD$130–$380 per pound) for this black gold, say the Asian variety lacks the taste and fragrance of Italian truffles.

During an inspection of a black truffle farm near Turin, where a dozen years ago T. melanosporum truffles were planted, researchers of the Institute for Plant Protection (IPP) of the National Science Council identified DNA of T. indicum in the soil and roots.
END_OF_DOCUMENT_TOKEN_TO_BE_REPLACED

Italian scientists are now defending the national dish, plagued by price hikes and cut by those counting calories, as a mood improver.

“Pasta contains tryptophan, an amino acid that turns into serotonin, the so-called hormone of happiness,” said Mauro Defendente Febbrari, an expert in metabolic diseases. “That is why eating pasta gives you a feeling of wellbeing and pleasure.”

His remarks come before the 10th edition festival dedicated to pasta in all its varieties called I Primi d’Italia, the name a play on the dish as a first course and the best in Italy.

If pasta is the ultimate mood food, Italians must be a happy bunch: they are among the top consumers of maccheroni, tortellini and linguine on the planet. Each Italian winds up some 61 pounds (28 kilos) of spaghetti a year.

END_OF_DOCUMENT_TOKEN_TO_BE_REPLACED

Not to be outdone by New York, a restaurant in Italy’s fashion capital has opted to equip the menu with calorie counts.

The American initiative, already weighed down by an appeal, would only cover restaurant chains. But the Ristorante Romani, which voluntarily decided to list just how many calories the risotto alla milanese packs is an upscale, family-run venue in the city’s historic center.

“It’s a question of transparency and propriety,” owner Maria Ciaramella told newspapers. “It’s also the best way to meet the needs of our customers — both men and women — who will soon have to face the dreaded swimsuit test.”

To do it right, the restaurant brought in Italian dietitian to the stars Nicola Sorrentino. His outside expertise means there will be no flubbing on exactly how much the tortelloni with scampi, figs served with a “cascade of flowers” (edible? do those count as carbs or protein?) may bulge from your bikini.

Other items under scrutiny include linguini with lobster and cherry tomatoes, risotto alla pescatora and Chateaubriand with potatoes. It’s hard to imagine the truly diet-conscious even glancing at dessert items such as tiramisu, torta della nonna and the house specialty, a killer Neopolitan ricotta cake (pastiera alla napoletana).

With prices hovering around 45 euro a head ($70) sans vino, I haven’t been there since the dot-com boomlet allowed me to entertain clients on the company tab, but have heard that last year’s slight makeover has made the place even more comfortably old-school than it was.
Image courtesy Ristorante Romani.

A computer program that reads human expressions may bring an about-face in marketing.

Dutch researchers using the software recently for a consumer test project seconded what wise men have always known: Sweets are the surest way to make a woman smile.

Some 300 women in six European countries were filmed as they ate five foods: vanilla ice cream, chocolate, cereal bars, yogurt and apples. Not surprisingly, ice cream and chocolate produced the most happy expressions across the Old Continent. More at Wired.