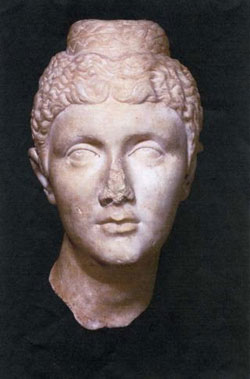 caption: found by police in an antiques market, this bust was put into a 2008 art show of recovered works.

Even tomb raiders have to deal with a market in crisis: in the first half of 2009, thefts of Italy’s art and historical treasures were down 52% compared to last year.

Some 12,716 precious artifacts were stolen from churches, archeological sites, museums and private homes in the first six months of 2008, while 6,000 items disappeared so far this year, according to figures from the art-theft patrol of the Carabinieri.

Many of these paintings, vases, sculptures, religious paraphernalia end up on the international black market.

Key recoveries include Pompeian frescoes, funerary urns, objects from the Neolithic Age, bronzes and modern and contemporary art paintings, including an oil on canvas by Giorgio De Chirico.

For at least a hundred years, tomb raiders, called â€œtombaroliâ€ in Italian, have been ferreting out artifacts and selling them, mostly unhindered, on the international market.

Roberto Conforti, who heads the special art-theft patrol of the Carabinieri, says the black market for artifacts rivals Italyâ€™s drug and arms trade. In the last 30 years over 300,000 objects stolen from tombs have been recovered, according to Minister of Culture statistics.

2 thoughts on “Upside to Financial Crisis: Tomb Raiders Out of Work”