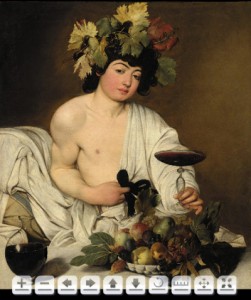 Advances in photographic technology have nearly doubled the capacity of HAL9000’s imaging devices, soaring from 16 billion pixels in 2007’s Last Supper conversion — then claimed to be the maximum available — to 28 billion pixels in Botticelli’s Primavera, aka Allegory of Spring, another piece digitized by the company. That’s about 3,000 times the resolution of a normal digital camera. Pixel density, measured in pixels per inch, has also increased from 580 ppi to about 1,500 ppi, resulting in much greater detail.

Using proprietary technology dubbed FlyBy, in a standard HAL9000 calls Real High Definition that the company developed to scan the Shroud of Turin, it took about three hours to shoot 198 pictures of Caravaggio’s oil work with a Nikon D3X hitched up to a stabilizing structure something like a pantograph. Once stitched together, the resulting state-of-the art digital Bacchus weighs in at 17 GB.

“I think it’s pretty amazing,” said Todd P. Olson, currently on leave from teaching European art history at UC Berkeley to work on a book about Caravaggio. “A lot of these small-scale paintings are housed in crammed collections behind glass. There’s an interesting intimacy (with the digital version), not only the capacity to get close but also to wander across the surface.”

Olson guided a reporter through some of the overlooked details of the 1590s painting of the pagan deity, including the seductive mimicry of dark hair intertwining with grapevines as well as the “aha!” moment of the figure in the wine carafe.

Going down deep into the craquelure, or fine web of cracks caused by age, reasserts the “made-ness” of the object, Olson says.

“It helps dismantle the illusion and gives you tools the artist wanted you to have,” he said. “Here’s this young, ephebic boy sliding between sexualities, enticing and seducing — you want to believe his come-on, the overripe rotting fruit, the whole thing. The technology enables a relationship between the collapsed illusion and that desire to be seduced.”

The Uffizi Gallery in Florence, one of Italy’s most trod-upon tourist sites, is the latest museum to open its doors to HAL9000. Tech lead Mauro Gavinelli and a team of six shoot the priceless paintings when the museum is closed to the public.

“These kinds of images are more than high-quality reproductions,” said Antonio Natali, director of the Uffizi Gallery, noting that the museum has long fostered partnerships with tech companies for similar projects. “They give us the chance to study and make paintings known to a wider audience. Of course, they can’t replace the emotions inspired by the real thing, but they are definitely an asset.”

Natali remembers studying masterpieces from black-and-white photos, followed by color prints that were “dangerous, because the colors often weren’t true to the original and could lead to false conclusions,” he said. Nowadays, scholars around the globe can access online image services like Artstor. Such websites are helpful, but quality can vary widely.

Vincenzo Mirarchi, HAL9000’s general manager, is careful to repeat that the images aren’t stand-ins for the originals. “There’s no question of whether people are still going to go to the Uffizi to marvel at this painting,” Mirarchi said. “We’re not about taking the place of museums.”

For most people, however, it’s easier to ogle masterpieces from a computer screen than in real life. Many of the paintings HAL9000 will digitize — all without bulletproof glass protection and in some cases without distracting frames — are not available for museum loan, and others can be difficult to view because they are more mobile: Bacchus, for example, has been on hiatus from the Caravaggio room in the Uffizi since May, starring in another exhibit.

HAL9000, based in the Northern Italian town of Novara, has plans to digitize another 24 Uffizi masterpieces, including Michelangelo’s Tondo Doni.