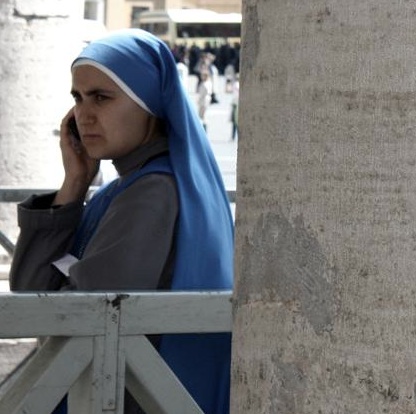 UPDATE: news reports are calling the case a hoax. The lawyers who claimed to represent the young woman now say they have no photos proving the pictures were on Facebook.

A 31-year-old Italian woman, who will take vows to become a nun in the fall, is suing to have topless photos of herself removed from Facebook.

Bare-chested photos of the woman were snapped by her then boyfriend on a Sicilian beach â€” it was the last vacation they took together before she ended the relationship with the plan to don the habit.

Thwarted, the former lover reportedly tagged them “topless nun” and news of the pics spread.
The woman, unnamed in news reports, asked her ex-beau repeatedly to remove them from his profile, but he refused. Italian news agency ANSA reported the photos have drawn comments including: ”If all nuns were like her, I’d become a priest.â€œ So far, no names or pics have surfaced.

Although Italians lag behind other EU nations for Internet use, Italy may be the first country to make a full-length feature film about Facebook, called â€œFeisbumâ€ (as per the Italian pronunciation) a rom-com in episodes about how the US social media company is changing relationships.