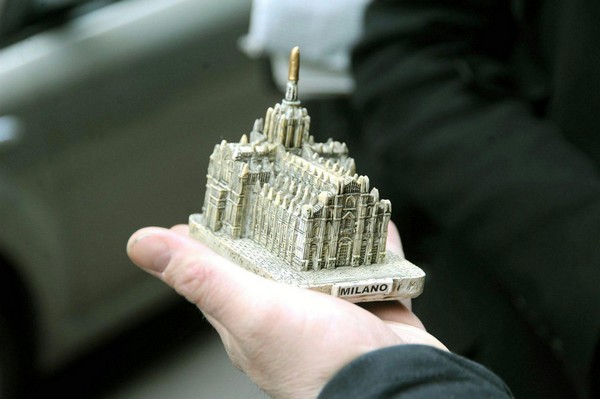 After Italian Prime Minister Silvio Berlusconi was struck in the face with a replica of Milan’s cathedral Dec. 13, souvenir sellers here are reporting brisk sales of copycat statues.

“Around here, sales of some tourist items slow down or stop for awhile, ” a vendor identified as Willy told told conservative daily newspaper il Giornale. “The mini-duomo was one of those items. Today, they’ve started moving again. A lot of journalists are buying them, but also people who want to give them as Christmas gifts. ”

Other vendors reported that they sold maybe one of the statues representing the soaring Gothic spires of the fourth-largest church in the world and icon of the city a month, but sold 40-45 a day since the incident.

The dangerous doodad — Berlusconi landed in the hospital with a broken nose, two cracked teeth and also suffered injuries to his lips and cheek — measures 10 x 10 centimeters (about 4 x 4 inches) and is made of resin and chalk. Sold in kiosks in the square around the cathedral, it can cost anywhere from â‚¬6-â‚¬12 euros ($8.70- $17.50).

Massimo Tartaglia, a 42-year-old with a history of mental problems, hurled the mini-cathedral through the crowd on Sunday as Berlusconi greeted supporters in a rally. Tartaglia is now in isolation at Milan’s San Vittore prison. While he has written a letter apologizing for his “cowardly act,” police are now investigating Facebook groups that sprung up defending his act of tchotchke terrorism.