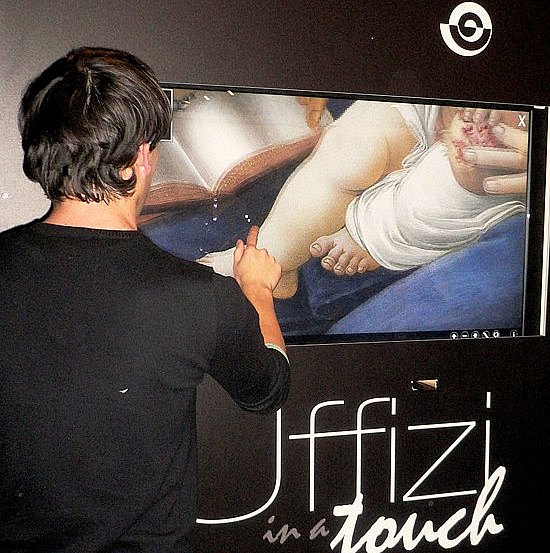 Hands on with a chubby Christ child. @centrica

If you’ve ever stared at a painting and wanted to reach out and squeeze that adorable little putto, you’ll soon have a chance to do it without getting arrested.

Florence’s Uffizi Gallery, one of the largest treasure troves of Renaissance art, is developing a touch-screen device that allows art lovers to zoom in for a more hands-on approach to the masterpieces. 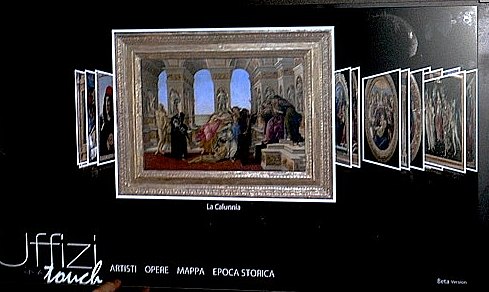 You can flip through centuries of art the same way you scroll through your albums on iTunes.

The program is called “Uffizi in a Touch” (sadly, a name not vetted by anyone who actually speaks English) developed by an Italian company called Centrica.

It took them four years to take life-size 100-megapixel photos that will be up for perusal in December for researchers and the more tactile groups of tourists.

No word yet on whether Apple will be after them for using the Cover Flow technology that’s been on the Cupertino company’s devices since 2006.

Curiosity can lead to a lot of uncomfortable places. I decided to give up entertainment reporting while crouched in the stairwell of L.A.’s Mondrian hotel on an assignment that had me stalking Leonardo Di Caprio at the height of his “Titanic” fame.
This time, I was in a bad part of Milan at 1:40 a.m. To be precise, Piazzale Loreto — the place they strung Mussolini up by his toes — waiting for a trash truck.

As far as I could make out, I was the only member of the fair sex in the area that wasn’t practicing the world’s oldest profession — but tell that to the men buzzing around the all-night newsstand.
Despite the precedents, curiosity had again got the better of me. I don’t have a car. I don’t even have a driver’s license anymore. But I was writing about a new gizmo that Amsa, Milan’s cleaning and sanitation department, patented to clean under parked cars. And I really wanted to see it in action.
I don’t mean to sound too Brenda Starr-intrepid-girl-reporter. The press office had first said the crew using the experimental “facilitator” — that may end the game of musical parking spaces played by drivers of 16,000 cars every week — would be in my neighborhood that night.

Then they called back to say that it would only be in Bad Part of Town. I’d already promised to turn the story around the next day and the facilitator only came to my neighborhood once a week. It was Piazzale Loreto or nothing.
Trash trucks are something most of us never pay attention to. They seem very much alike, especially if you’re standing in an enormous roundabout trying desperately to see which one is different.
Sure, they come in different shapes and sizes — some little trucks with round sweepers out front, some with enormous cisterns — but I didn’t know what the new, improved cleaner was supposed to look like.
To make matters more interesting, the press officer had warned me not to expect warm fuzzies from the crew. “I’ll tell them you’re coming, otherwise I can’t guarantee they’ll talk to you. They can be not very polite sometimes.”
That sounded like an understatement. With this caveat in mind, I approached all the trash cars at the stoplights to ask if they were “my” crew. Perhaps it was the damsel in distress factor, but they were all better than polite.
They didn’t know where the crew would be, but they did start a tam-tam of cell phone calls that eventually helped me locate them.
When I did, it seemed that press officer had perhaps overstated the scale of operations. They weren’t expecting me, with a camera and notebook, but an American Television Crew. Amsa had even sent out an executive to make sure no one misbehaved. He watched, dapper suit and tie now drooping in disappointment at my sole snapping and filming.
The two-man crew of the facilitator were gracious and helpful, even letting me try out the new device (harder to use than it looks but very effective) that pushes four gallons of water a minute of debris out from under the car and into the street where it’s whisked away by the truck.
At 2:25 a.m., curiosity satisfied, I called a taxi and headed home. Sometimes it’s worth it.